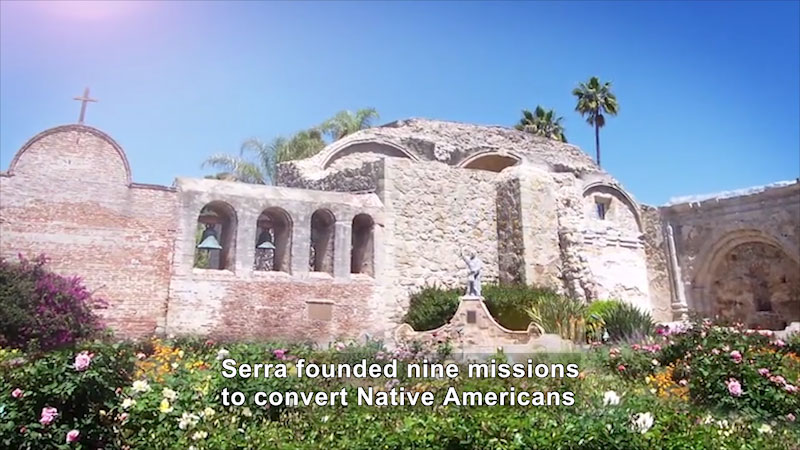 (female narrator) As the Revolutionary War erupted in the 13 colonies, the first European settlements on the West Coast were just getting established by an elderly Spanish missionary named Junípero Serra. Between 1769 and 1784, Serra founded nine missions to convert Native Americans to Catholicism and make them Spanish subjects. Serra was canonized as a saint for his efforts, but some question whether Serra's missions were more harmful than helpful to the indigenous population.

(Describer) A pointer on a timeline moves to 1713 as a map zooms in on western Europe, then an island east of Spain.

Junípero Serra was born to a farming family on the Spanish island of Majorca in 1713. Growing up, he visited local Franciscan friars, who taught him to read and write. He joined the Franciscans as a novitiate, or student, and by age 26, became a full Catholic priest. Ten years later, believing that God called him to spread Catholicism, Serra sailed to the New World to convert Native Americans. After arriving on the Mexican coast at Veracruz, Serra trekked 250 miles on foot to Mexico City to teach at a missionary school. During his journey, he critically injured his leg-- a wound that would plague him for life. Yet, for the next 20 years, in addition to teaching, Serra traveled more than 5500 miles on foot around New Spain, ministering to Spanish colonists and evangelizing indigenous people. Serra's life would change dramatically in 1769. That year, King Philip V of Spain, concerned that Russian colonists from the Pacific Northwest sought to occupy California, commanded the governor of New Spain to secure the California coast. The quickest way to establish colonies was to convert the indigenous people there into loyal, Catholic Spanish subjects. The governor implored Serra to establish missions along the coast in order to claim the region for Spain. At age 56, the old missionary sacrificed what comfort he had in New Spain and ventured into the wild and unknown California. After walking 900 miles, Serra reached San Diego on July 1, 1769, and founded Mission San Diego de Alcalá, the first European settlement in California. He then journeyed up to Monterey Bay and established Mission San Carlos Borromeo a year later, which served as his headquarters. Over the next 14 years, Serra founded seven more Franciscan missions along the coast. Serra converted 4,600 Native Americans to Catholicism. These new believers, called neophytes, lived at the missions. There, they performed agricultural labor and worship under the strict discipline of the mission priests. The missions were guarded compounds, from which the neophytes could not leave, lest they reunite with their tribes and forsake their new faith. Some historians claim that the close living quarters facilitated the spread of fatal diseases among them. Serra, however, fervently believed that the missions not only saved their souls, but protected them from marauding Spanish soldiers who frequently raided indigenous villages. Considered by many to be the father of California for his exploration and evangelization, Junípero Serra died on August 28, 1784, after securing California for Spain. By 1833, there were 21 missions in California. In 2015, the Catholic Church canonized Junípero Serra, making him the first and, so far, only saint canonized in the United States. Accessibility provided by the U.S. Department of Education.

Junípero Serra, a Spanish missionary, helped establish some of the first colonies on the West Coast of the United States. Later canonized as a saint for his missionary work, Serra's efforts are now questioned for being more harmful than helpful to the indigenous populations. Part of the "World Explorers" series.