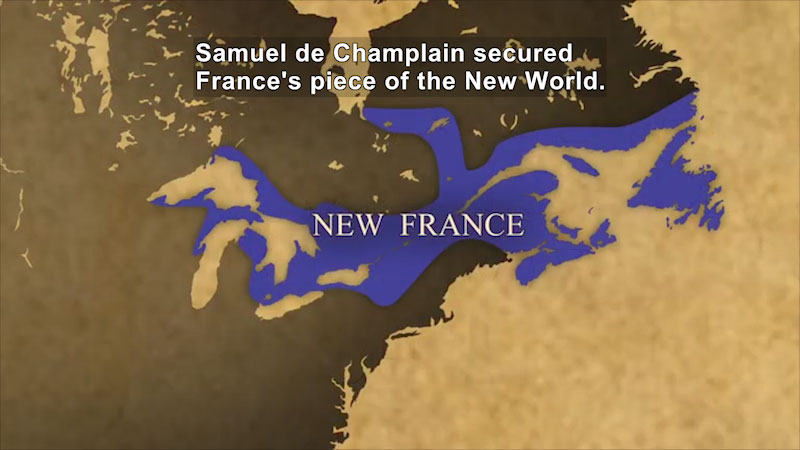 (female narrator) Known as "The Father of New France," Samuel de Champlain secured France's piece of the New World. He established the first two French colonies and became the first European seeing the Great Lakes, claiming them for France. Champlain also solidified many long-lasting alliances with Native Americans. But those alliances would pit France against a formidable tribe for centuries to come.

(Describer) As a pointer on a timeline moves to 1570, a map zooms in on France, and a dot appears labelled Hiers-Brouage.

Born to a family of mariners around 1570 in a French harbor town, Champlain learned to navigate and make nautical maps. As a young man, he voyaged to Central and South America on his uncle's ship. Observing Spanish colonies, he wrote a secret report about Spain's territories in the New World for King Henry IV of France. King Henry was impressed. In 1603, King Henry chose Champlain to lead a scouting expedition for potential colonization sites in Canada. After two years of studying and mapping the region, Champlain selected a site on the peninsula of Nova Scotia for settlement. There, he founded Port Royal, France's first North American colony. A gifted leader, Champlain initiated the Order of Good Cheer. Each day, a settler and members of the neighboring Mi'kmaq tribe would gather game, fruit, and fish and prepare a banquet shared among fellow settlers and natives.

(Describer) It's depicted in a painting.

Determined to settle more of Canada, Champlain sailed north. Guided by the Montagnais and Algonquin tribes, he explored the vast Saint Lawrence River until he reached another optimal site. In 1608, Champlain established Quebec City, New France's second permanent colony. He had satisfied King Henry's demand for French settlements. But Champlain didn't stop exploring. He journeyed onward, discovering more of North America. First, Champlain sailed along the East Coast, from Nova Scotia to Cape Cod, mapping the entire course. Next, he headed west, where he met many tribes of the Saint Lawrence Valley. They guided him deeper inland, into present-day Vermont and New York state. In turn, Champlain consented to help them fight the Iroquois, their enemy tribe. While on an excursion to map the lake that would become his namesake, Lake Champlain, a group of Iroquois ambushed him and his native companions. Champlain killed two of the Iroquois chiefs in the ensuing battle. The Iroquois fled, but the French became their enemies for many years to come.

(Describer) Two Native groups fire arrows at each other.

His allies told Champlain about magnificent lakes to the west that no European had seen. They guided him through the wondrous interior lands of North America, until they reached the Great Lakes, the largest group of freshwater lakes on the planet. Champlain explored and mapped two of the five Great Lakes-- lakes Ontario and Huron. He implicitly understood their importance. They were navigable waterways that would link the treasures of the North American interior to the Atlantic Ocean, and thus, to Europe. Champlain's accurate maps to the Great Lakes opened the interior of North America for future exploration and trade. Beginning in 1620, Champlain devoted his life to administering the colonies, until his death in 1635. Under his leadership, the French colonies in the New World succeeded for more than a century. But during the French and Indian War, the enemy Iroquois joined British forces. Together, they vanquished the French, who lost most of those Canadian colonies that Champlain had worked so hard to establish. Accessibility provided by the U.S. Department of Education.

Known as the father of New France, Samuel de Champlain explored much of what is now Canada. Champlain established the French colonies of Port Royal and Quebec City among others and utilized the navigable waters of the Great Lakes to link the middle of North American with the trade routes of the Atlantic. Part of the "World Explorers" series.