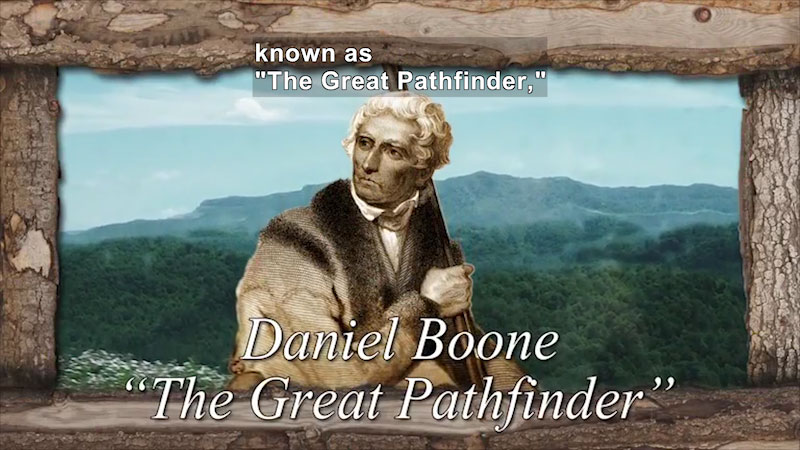 (female narrator) Daniel Boone, known as "The Great Pathfinder," earned his heroic title by blazing a trail through the Cumberland Gap into Kentucky, providing settlers on the American frontier with a safe route through the treacherous Appalachian Mountains.

(Describer) On a timeline, a pointer moves to 1734, and a map zooms in on the United States, then Pennsylvania is highlighted.

Boone was born in a log cabin near Reading, Pennsylvania, in 1734 at the edge of the American frontier. By 12, Boone learned to hunt for his family's food. He befriended the local Lenape tribe members, who taught him wilderness survival skills. Boone took his gun into the wilderness for days at a time, hunting what he found. At 14, he shot and killed his first bear. Later, according to legends that followed him everywhere, he took down a panther-- courageous feats for anyone, especially a child his age. When he was 16, his family moved to the Yadkin Valley in North Carolina. Frontier life turned Boone into a calm, skilled marksman. Throughout his life, he supported his family by hunting and selling hides in the fur market. When the French and Indian War started in 1754, Boone was quick to volunteer, defending English settlements against French and Indian attack. Serving under General Edward Braddock, he wheeled supplies to soldiers in his horse-drawn wagon. The job was dangerous. Wagons were common targets for Native Americans ambushes. In the Battle of Monongahela, near modern-day Pittsburgh, Boone nearly died during an attack. After the war, Boone married Rebecca Bryan on August 14, 1756. Together, they had 10 children and Boone resumed his living as a hunter and trapper.

(Describer) In a painting, he sits on a horse as dogs stand beside them.

On May 11, 1769, Boone set out on an expedition west into the Appalachian Mountains. He blazed a trail through a narrow opening in the mountain range that led into Kentucky known as the Cumberland Gap. Boone regarded Kentucky as a land of opportunity and was determined to colonize it. The Cumberland Gap trail was the key to moving settlements over the mountains. In 1775, he and a group of about 30 woodsmen, armed with axes, hacked the wilderness road right out of the mountains along the Cumberland Gap. Boone forged a path to the Kentucky River. On its banks, he founded Boonesborough, one of the first English settlements west of the Appalachians. Boone brought his own family to Boonesborough and became its leader. During the Revolutionary War, he protected the settlement from ongoing attacks by the Shawnee Tribe, who allied with the British forces. Despite being captured by the Shawnee in 1778, the cunning woodsman escaped and warned the settlers about an impending ambush. Under his leadership, they were able to defend themselves. The Shawnee and British were defeated and Kentucky was won for the fledgling United States. Over the next 30 years, more than 300,000 settlers traveled the wilderness road to settle in Kentucky, which became the 15th state in 1792. As for Boone, he moved even further west, to Missouri, where he explored new wilderness and hunted until the end of his days in 1820. Daniel Boone is a true folk hero. His brave explorations pushed the American frontier west, at a time when the wilderness was filled with unknown dangers and wonders. Accessibility provided by the U.S. Department of Education.

Known as "The Great Pathfinder," Daniel Boone provided American settlers on the frontier with a safe route through the Appalachian Mountains. He was an early American frontiersman and legendary hero who helped blaze a trail through the Cumberland Gap, a notch in the Appalachian Mountains near the junction of Virginia, Tennessee, and Kentucky. Part of the "World Explorers" series.