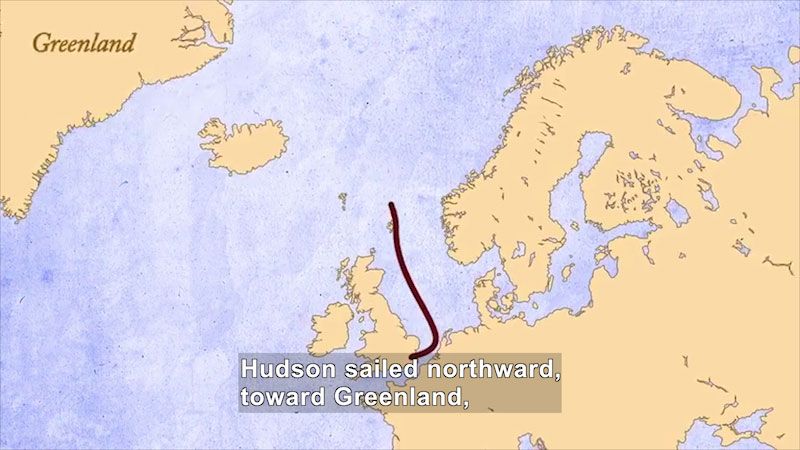 (female narrator) Henry Hudson, a captain of great repute, made four daring explorations into the Arctic region in hopes of finding a northern passage between Europe and Asia. Although he never found it, what he did discover would change North American colonization forever.

Hudson was born between 1560 and 1570 in England, at the height of the Age of Exploration, when European kingdoms raced each other to find trade routes to Asia. Little is known about Hudson's early years, but he likely learned seafaring and navigation firsthand, moving through the ranks to become captain of his own ship. His recorded story begins in 1607 in London, when British traders commissioned him to find a northern passage from England, through the Arctic Ocean to Asia. With the eastern and western routes to Asia discovered, navigators hoped to find a new route to the North through the treacherous ice-filled waters of the Arctic Ocean. Hudson sailed northward, toward Greenland, on May 1, 1607. Despite sailing through the summer months, he never found a route through the Arctic Circle clear of ice. In 1608, Hudson again tried to find a northern passage for the British. This voyage took him northeast, across the coast of Russia. Far into the frozen Arctic he ventured, but time and again, the mighty ice pack thwarted his progress. In 1609, the Dutch hired him to make a third attempt. On April 4, 1609, he embarked in a ship called the Half Moon and headed into the Arctic. Again, the ice-choked sea prevented passage. Instead of returning the ship to the Netherlands, he commandeered it across the Atlantic to investigate reports about the Northwest Passage-- a fabled waterway that traversed North America. In July, he landed in Canada, and sailed down the East Coast, searching for its entrance. He explored a large river in present-day New York. Although it didn't cross the continent, Hudson noted that it was a perfect site for colonization-- friendly native peoples, abundant wildlife, and fertile soil. Within 15 years, the Dutch established a colony there called New Amsterdam-- now New York City-- which sits on the banks of the Hudson River, named for the man who saw its potential. In 1610, working again for the British, Hudson attempted his last journey to find a northern passage to Asia. He sailed west, past Greenland, and into an uncharted strait in Canada.

(Describer) North of Newfoundland and Labrador.

After 500 miles of dodging icebergs, he emerged into a tremendous body of water and was the first European to see the world's second largest bay, which, along with the strait, would be named in his honor. Thanks to this discovery, England established the Hudson's Bay Company and took control of the lucrative Canadian fur trade from France, setting the stage for eventual British dominance in North America. During the long winter of 1610, Hudson's ship was trapped in the ice of the bay. He and the crew argued about the voyage's future. Hudson wanted to continue searching for the northwest passage. The crew wanted to return to England. In the spring, 1611, when the ice melted, the crew set Hudson adrift in a lifeboat with his young son and seven of the crew. They were never seen again. It was a tragic end for the brave Hudson, who tenaciously explored the perilous waterways of the Arctic. Although he never found a northern passage to Asia, his early explorations of the waterways that now bear his name-- the Hudson River, Hudson Strait, and Hudson Bay-- cemented North America as a trade and colonization destination for years to come.

English explorer Henry Hudson was born at the height of the age of exploration in Europe, as navigators hunted for new routes to Asia. Hudson's multiple voyages in search of a Northwest passage eventually set the stage for British colonial dominance in North America. Part of the "World Explorers" series.