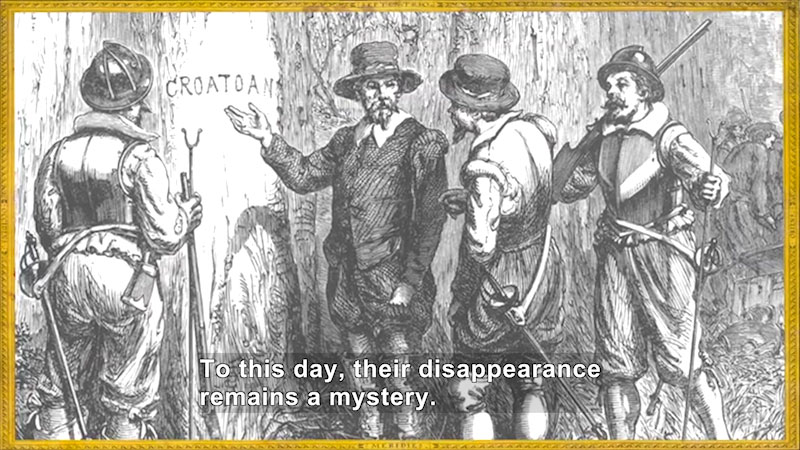 (female narrator) Between 1585 and 1587, Englishmen Sir Walter Raleigh and John White founded the first British settlement in the New World-- the Roanoke Island Colony. Raleigh organized and financed the expeditions. White led colonists to the island off the shore of today's North Carolina. But three years later, when White returned from England, the settlers had completely disappeared. To this day, their disappearance remains a mystery.

(Describer) Titles: PBS Education. World Explorers: Sir Walter Raleigh and John White. A timeline pointer moves to 1554 as a map zooms in on the United Kingdom.

Sir Walter Raleigh was born in Devon, England, around 1554. As a young Protestant man, he helped suppress Irish Catholic rebellions against the Protestant English queen, Elizabeth I. The queen rewarded Raleigh with a knighthood, rich estates, and the right to colonize America. John White was born in London between 1540 and 1550. As a young artist, he made a living accompanying explorers as an illustrator and mapmaker of the New World. White's skilled a detailed sketches of the lands and the native Inuit tribes brought him to the attention of Raleigh, who, in 1584, was planning an expedition to colonize islands off the East Coast of North America. Raleigh yearned to explore the New World himself, but Queen Elizabeth would not allow her trusted advisor to leave her court in London. John White would bring back visual images and maps of lands that Europeans still knew so little about. White, along with two ships and several dozen men, sailed from England in April, 1584, and landed on the coast of today's North Carolina on July 13, 1584, planting the first English flag in the New World. They set up a base on Roanoke Island. White explored the coast, painting many images of the region's flora, fauna, and native people. White's illustrations became the earliest visual record of Native American life on the East Coast. His detailed maps highlighted dangerous waters, locations of native villages, and natural resources that could be used for supplies-- immensely helpful for later sailors and colonists. Lacking proper provisions for permanent settlement, the expedition returned to England in less than a year's time. Raleigh reported their findings to Queen Elizabeth I and the new territory was named Virginia. Raleigh sent a second expedition to Roanoke Island in 1585 to establish a military post. This attempt failed for lack of supplies. Still eager to establish a colony, Raleigh funded a third effort in 1587. This time, he selected White to serve as governor. White returned to Roanoke Island in July with 116 settlers, including craftsmen, laborers, and farmers and their families, and his own pregnant daughter and her husband. Soon after, on August 18, White's daughter gave birth to a girl-- the first English child born in the New World-- Virginia Dare, named for the new territory. Yet, by autumn, disputes with the local tribes and food shortages again plagued the colony. White returned to England, meeting Raleigh in October, hoping to obtain more supplies. Raleigh offered to sail relief supplies to the colony, but Queen Elizabeth conscripted all ships, including his, to prepare for the ensuing naval battle against the Spanish Armada. White didn't make it back to Roanoke with supplies until August 18, 1590, his granddaughter's third birthday. But no one was there. Every one of the colonists had vanished. To this day, their fate remains unknown. Some historians speculate that the colonists were killed by hostile tribes. Others say they might have split up to live among friendlier native people. After searching in vain, John White returned to England, brokenhearted at the disappearance of his daughter and granddaughter. He died at one of Raleigh's great estates in 1593. Although Sir Walter Raleigh continued to plan and fund expeditions, including one of his own to Venezuela in 1595, he earned many enemies along the way. When Queen Elizabeth died, her successor, James I, eventually convicted Raleigh of treason and he was beheaded in 1618. The efforts of Raleigh and White greatly expanded European knowledge of North America's East Coast and the native people living there. In 1607, the British finally established a New World colony in Jamestown, Virginia. The Jamestown colonists managed to persevere in the Americas, thanks in part to those who had gone before them. Accessibility provided by the U.S. Department of Education.

Sir Walter Raleigh and John White were the founders of the first English colony in the United States, the Roanoke Island colony. The contributions of Raleigh and White greatly expanded European knowledge of the New World. Part of the "World Explorers" series.