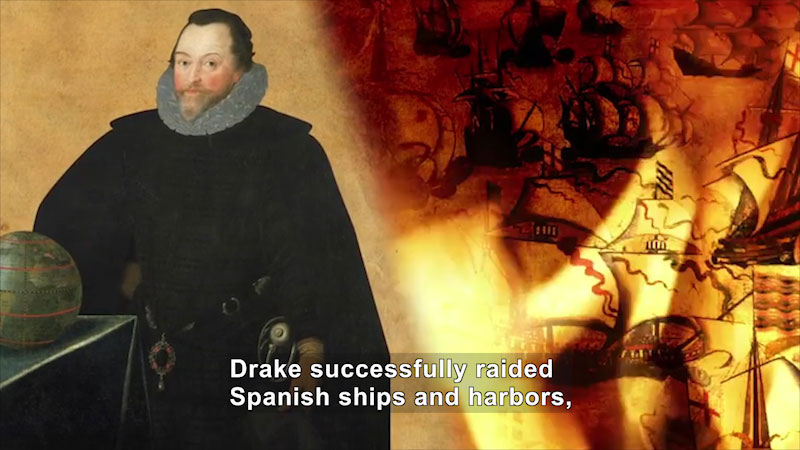 (female narrator) In the race for exploration and colonization during the 16th century, Spain was the empire to beat. Francis Drake, a brilliant pirate, was chosen by England's Queen Elizabeth I to lead numerous attacks on the Spanish naval fleet as an official privateer. For more than 20 years, Drake successfully raided Spanish ships and harbors, becoming a national hero for England.

(Describer) Titles: PBS Education. World Explorers: Francis Drake. As a timeline pointer moves to 1540, a map zooms in on the United Kingdom.

Drake was born in England around 1540, the oldest of 12 brothers. While young, he joined the fleet of his cousins, the Hawkins family. Together, they seized and looted merchant ships along the French coast. Drake soon realized that the new African slave trade offered bigger fortunes than mere piracy, and like many of his time, engaged in this reprehensible business. In 1567, he took a ship of captives from Africa and illicitly sold them to New World colonists, despite the Spanish ban on English trading in the Spanish colonies. His ship was attacked and many of his crew died. Drake escaped and returned to England with a lifelong hatred of Spain. In 1572, Queen Elizabeth, who resented Spain's ban on English trade in the New World, granted Drake a privateering commission-- an official approval to raid and loot Spain's property. That year, he made his first voyage as a privateer, sailing to Panama. He captured Nombre de Los Dios, an important Spanish port, and then attacked a silver-carrying mule train. Drake returned to England rich and famous. Queen Elizabeth was pleased. In 1577, with hostilities between England and Spain brewing, Queen Elizabeth unleashed Drake on the Spanish fleet. He would sail up the West Coast of the New World, capturing and pillaging any Spanish ship he found. Until this time, only Spanish ships had ever sailed the Pacific. Drake did not disappoint. He left England with five ships, and even though only his lone flag ship, the Golden Hind, succeeded in making the journey, he sacked Spanish ports and hunted Spanish ships, capturing more than $14 million worth of gold, jewels, and silver. He continued up the West Coast and eventually landed near modern-day San Francisco, claiming it for England.

(Describer) They surround Natives in a tent.

Drake returned to England via the Pacific Ocean, making him the second person to circumnavigate the globe after Ferdinand Magellan.

(Describer) A dotted line shows his route south of Africa.

Queen Elizabeth personally boarded the Golden Hind when Drake arrived in 1581 and rewarded him with a knighthood. When King Philip II of Spain declared war on England in 1585, Queen Elizabeth once again requested Drake's services. Leading the great expedition, Drake departed England with 25 ships and 1800 soldiers in September of that year. Over the next 10 months, Drake laid waste to Spanish ports in Spain, the Cape Verde islands in the eastern Atlantic, Hispaniola, Colombia, and even Spanish Florida. By 1586, King Philip had had enough of Queen Elizabeth and Drake, whom he called "El Draque," or "The Dragon." He planned a full-scale naval invasion of England and began to assemble a huge fleet of warships-- the Spanish Armada. But Drake boldly sailed a small fleet into the Spanish harbor of Cadiz and destroyed dozens of ships and thousands of tons of supplies meant for the armada. Drake's raid delayed the attack on England for nearly a year, allowing the British navy to prepare and eventually defeat the Spanish Armada. Drake sailed his last voyage in 1595, during another English campaign against the Spanish in America. He succumbed to fever and died on January 28, 1596.

(Describer) He's lowered into the sea.

In an era of fierce competition for land and wealth, Francis Drake was a seafaring hero to England. As one of Queen Elizabeth's most effective and formidable weapons, he was responsible for weakening the Spanish empire around the world. The British empire would soon fill the void and command and shape the modern world. Accessibility provided by the U.S. Department of Education.

In the race for exploration and colonization during the 16th century, Sir Francis Drake was a famous privateer and explorer known for his raids on Spanish fleets and harbors. While regarded as a hero to England during his life, Drake's violent privateering and involvement in the slave trade makes him a controversial figure today. Part of the "World Explorers" series.