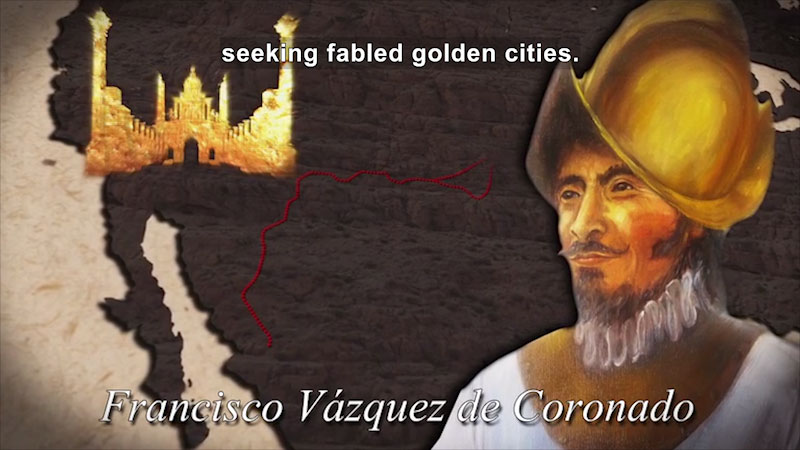 (female narrator) Francisco Vázquez de Coronado famously embarked on a two-year, 4,000-mile exploration of the American Southwest, seeking fabled golden cities. Instead, he found buffalo herds, pueblos, tipis, and the Grand Canyon, becoming the first European to lay eyes on these symbols of American life. Was his epic journey a success or a failure?

(Describer) A map zooms in on western Europe as the pointer on a timeline moves to 1510.

Born to a noble family in Spain in 1510, Vázquez de Coronado was a younger son, and therefore not destined to inherit the family riches. So in 1535, he traveled to New Spain, the Spanish colonies that now comprise Mexico, to seek his fortune. Within three years, he had married into a wealthy family and was appointed governor of Nueva Galicia, a large province of New Spain. Inspired by the treasures found in the Inca and Aztec Empires, tales of golden cities to the north, called the Seven Cities of Cibola, percolated throughout New Spain.

Wealthy colonists, including Coronado's wife, invested huge amounts of money to fund an expedition to find the empire and loot it for gold and jewels. The viceroy of New Spain appointed Coronado as captain general of the expedition. In February, 1540, Coronado embarked over land with 300 Spanish soldiers and 1,000 natives to explore the region. He reached the first of the seven cities in July, 1540-- the grand Zuni pueblo, Hawikuh, in present-day New Mexico. Hawikuh, however, was a village of adobe-- bricks made from mud, straw, and sometimes dung-- not a city of gold. But it did have multi-story buildings, a central open plaza, and hundreds to thousands of inhabitants. Coronado conquered it and used it as a base to fan out east and west to search for other cities. The westbound expedition members reached the Colorado Plateau, where they were the first Europeans to gaze at the breathtaking geological formations that make the Southwest unique-- red rocks, hoodoos, or tall spires of rock, arches, and petrified forests.

These travelers met and traded with the Hopi tribe, another indigenous pueblo people. The Hopis even guided them to one of the world's seven natural wonders-- the awe-inspiring Grand Canyon. Coronado himself ventured east, and spent the winter among the pueblo villages near present-day Albuquerque, New Mexico. There, he was told about Quivira, another rumored city of gold, far from the pueblo peoples. Optimistic that Quivira would be one of the mythical Seven Cities of Cibola, he ventured northeast in April, 1541. While traversing the Great Plains in Texas, Oklahoma, and Kansas, Coronado was the first European to meet the nomadic Plains Apaches, noting that they lived in tents made of the tanned skins of the buffalo. Coronado reached Quivira only to find yet another Indian village, not a city of gold. He then gave up his quest for treasure. In 1542, he returned to Mexico, but because he returned with no gold or jewels, the viceroy branded his expedition a failure and removed him from his governorship. He died in Mexico City on September 22, 1554. Was Coronado's expedition really a failure? After all, he discovered many treasures of the American Southwest-- pueblos, vast buffalo herds, and the Colorado Plateau, now home to the greatest concentration of national parks in the United States, including the Grand Canyon. It would be 40 years before Europeans would again venture to the region, but Coronado's explorations had paved the way for the founding of Santa Fe, New Mexico-- the first colony established in the American Southwest. Accessibility provided by the U.S. Department of Education.

Francisco Vázquez de Coronado sought the fabled golden cities thought to be in the North American Southwest. His explorations did not turn up any golden cities; however, he was the first European to see the Colorado river and the Grand Canyon. Part of the "World Explorers" series.