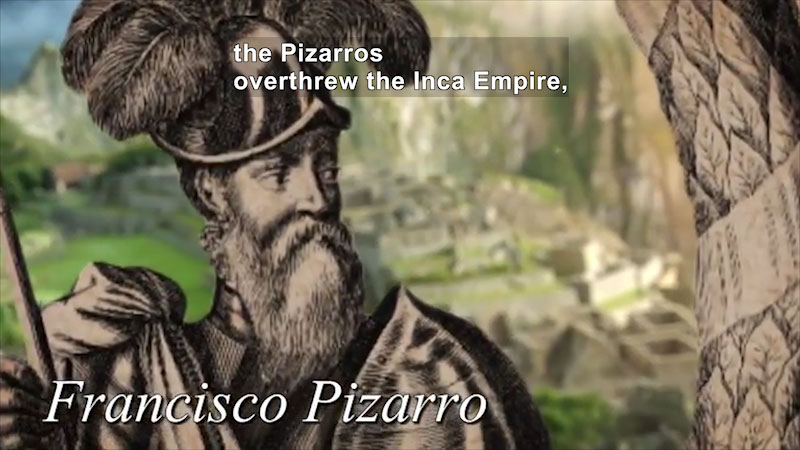 (female narrator) Ruthless and determined, the Pizarro brothers, four sons of a poor Spanish family, explored and conquered many lands in Central and South America. Led by the oldest brother, Francisco, the Pizarros overthrew the Inca Empire, the largest civilization in the New World.

(Describer) As a pointer on a timeline moves to 1471, a map zooms in on western Europe, and a bearded man is illustrated among gold coins.

Francisco Pizarro's early life gave no hint of the power and wealth he would later accumulate. Born to an impoverished Spanish family around 1471 and unable to read, he traveled to Panama as a common laborer when he was 38 years old. There, he worked his way up through colonial society and, in 1513, became a captain in Vasco Núñez de Balboa's expedition across Panama to reach the Pacific Ocean. Francisco was rewarded with land, slaves, and government positions in Panama. But it wasn't enough for him. He convinced Charles V, the king of Spain, to support an expedition to explore the lands of western South America, where an empire of gold was rumored to exist. Francisco invited his brothers, Gonzalo, Juan, and Hernando, to join him. Arriving in South America in November, 1532, the Pizarro brothers encountered the wealthy Inca Empire. Based in the Peruvian highlands, the Inca emperors conquered neighboring native tribes, controlling more than 10 million people, stretched over 2500 miles, from the Ecuadorian coast in the North, through the Andean mountain chain, to its southern tip in modern-day Chile. The emperors mined veins of gold and silver in the Andes to adorn their palaces and temples in the capital city, Cuzco.

(Describer) Blocks of houses are laid out before a palace.

Driven by word of these riches, the Pizarro brothers captured the Inca emperor, Atahualpa. Despite Atahualpa's supporters paying a ransom of enough gold and silver to fill a house, the brothers executed him as they marched toward Cuzco. King Charles hadn't authorized Atahualpa's execution. It seemed the conquistadors were abusing the powers he had granted them, so he began considering ways to rein them in. But King Charles was appeased when, in 1533, the brothers captured Cuzco. Francisco claimed... The Pizarros claimed extraordinary amounts of gold and treasure, but because the Spaniards saw no value in the ornaments created by the Inca goldsmiths, those many exquisite works of art were melted down and lost to history. Despite Cuzco's beauty, its high altitude and distance from the sea made it an impractical capital for Francisco. In 1535, he founded the the coastal city of Lima as the new capital, and settled into his governorship. But his rule would not last long. Tensions between Francisco and his long-time lieutenant, Diego de Almagro, over the distribution of the Inca treasure, led to civil war among the conquistadors. The Pizarro brothers captured and executed de Almagro in 1538. But de Almagro's supporters, in turn, assassinated Francisco on June 26, 1541.

(Describer) He lies on a floor with a few other men.

Only Gonzalo, the youngest Pizarro brother, remained in Peru. In 1542, to finally curtail the abuses of his conquistadors, King Charles V passed a series of laws called... These laws abolished the Encomienda system, taking away the land and slaves granted to the conquistadors and colonists. In response, Gonzalo led an uprising against officials acting on behalf of the king of Spain. For four years, this conquistador, not King Charles, held absolute power in Peru. Gonzalo was brutal to natives and Spaniards alike. In just two years, he executed 340 Spanish colonists, fearing they opposed him. Eventually, Spanish officials and colonists joined forces to quell Gonzalo's rebellion. In 1548, he surrendered and was beheaded in Cuzco. Gonzalo Pizarro was the last of the conquistadors. King Charles' new laws prevailed and put power back in the hands of the monarchy. The laws were passed just 50 years after Columbus discovered the New World, but they were too late to stop the widespread destruction of the native populations. The powerful Pizarro brothers brought down the Inca Empire, the last of the great native empires in the New World. With their conquest of the Inca, European control of South America was nearly complete. It wasn't until the early 1800s, after more than 250 years of Spanish rule, that Peru, along with many other South American countries, declared independence from Spain. Accessibility provided by the U.S. Department of Education.

Ruthless and determined, the Pizarro brothers explored and conquered much of what is now Central and South America in the name of the Spanish Crown. Led by oldest brother Francisco, the brothers overthrew one of the largest empires in the New World, the Inca Empire. Part of the "World Explorers" series.