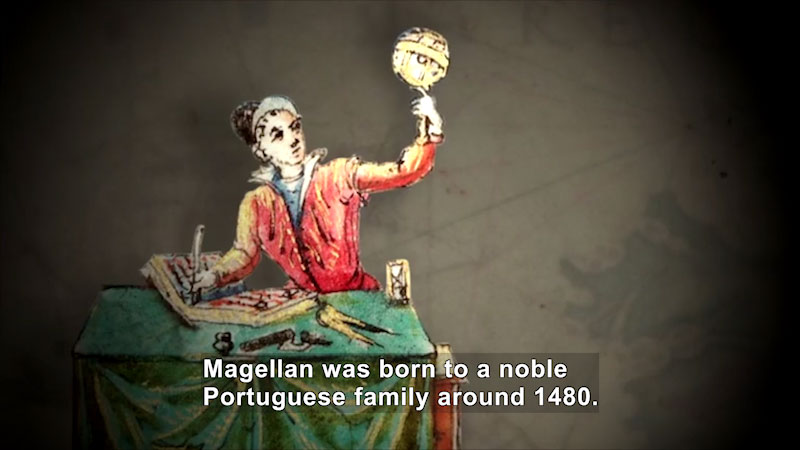 (female narrator) Ferdinand Magellan was the first person to reach Asia and the Indian Ocean by a westward route through the Americas and to cross the mysterious sea on the other side of the world. His voyage was groundbreaking and he made discoveries of lasting importance.

Magellan was born to a noble Portuguese family around 1480. At this time, spices, like nutmeg, cloves, and black pepper, were the most important commodities in the world. But these spices only grew on tiny islands called the Moluccas, in present-day Indonesia. Kings and sultans battled throughout the Indian Ocean for access to these islands, and sailors explored daring and dangerous routes to reach the islands. At age 10, Magellan became a page for the Portuguese queen, Leonora, learning astronomy, navigation, and map-making. In 1505, he joined the Portuguese armada and spent eight years conquering ports in East Africa and India so Portugal could gain control of the Indian Ocean and the spice trade. After nearly a decade of constant fighting for eastern access to the Moluccas, Magellan started considering a westward route. He believed the islands laid a few days past the New World, and hoped a passage through the continent would prove a shorter, safer route to the spices. In 1514, he petitioned King Manuel I of Portugal to lead a westward expedition to the Moluccas. King Manuel refused, and in 1517, Magellan renounced his Portuguese citizenship and went to Spain to seek support from King Charles I. Realizing that the voyage would give the Spanish open access to the Moluccas without traveling across areas controlled by the Portuguese, King Charles granted Magellan the expedition to find a route through the New World. On September 20th, 1519, Magellan sailed from Spain with five ships and 270 men. He crossed the Atlantic and sailed down the coast of South America until reaching a storm-lashed strait, now the Strait of Magellan, at the bottom of the continent-- a passage through the New World. By this point, he'd lost one ship at sea and another had deserted. Still, Magellan persevered and entered the strait on October 21, 1520. After 38 days of torturous sailing through cold and fog, the three remaining ships emerged into still waters. Relieved, Magellan named the ocean "Mar Pacífico," Portuguese for "Peaceful Sea." He anticipated a quick journey to the Moluccas. But Magellan unwittingly had set course to cross the largest ocean on the planet-- more than twice the size of the Atlantic. Month after month, the little fleet sailed across the immense ocean. Finally, after 99 grueling days without rest or fresh food, Magellan landed on the island now called Guam. After resting and replenishing at Guam, Magellan sailed to Cebu, now part of the Philippines, en route to the Moluccas. There, he befriended the island's chief and established the first Spanish alliance in the Pacific. Magellan agreed to fight alongside the Sabu chief, against the chief of a neighboring island. But on April 27, 1521, Magellan was killed in the battle.

(Describer) In an animation, he falls in shallow water.

The fleet navigator, Juan Sebastián Elcano, led the remaining crew to the Moluccas. He loaded the one remaining ship with spices and decided to sail back to Spain on the well-established westward route. Magellan had never intended to circle the globe. And yet, when the Victoria sailed into Spain on September 8, 1522, nearly three years after embarking, the expedition had completed the first circumnavigation of Earth and profoundly changed history. Magellan's expedition gave the first true record of the distribution of oceans and continents. He discovered the enormity of the Pacific Ocean, the vastness of the planet. And yet, by finding the strait that now bears his name-- the one linking the Atlantic and the Pacific, East and West, the new and the old-- he showed how connected the world could become. Accessibility provided by the U.S. Department of Education.

Ferdinand Magellan was the first person to reach Asia and the Indian Ocean by sailing a westward route through the Americas and across the Pacific Ocean. Magellan's groundbreaking voyage was the first circumnavigation of earth and gave the first true record of the distribution of oceans and continents. Part of the "World Explorers" series.