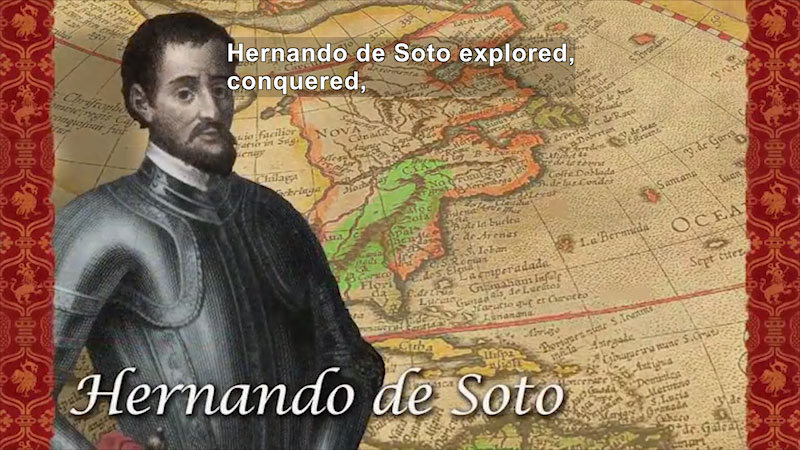 (female narrator) From and Andes in South America to the Appalachians in North America, Hernando de Soto explored, conquered, plundered, and enslaved. One of the most formidable Spanish conquistadors, de Soto helped conquer modern-day Panama, Nicaragua, and Peru for Spain. In pursuit of more treasure, he explored the Southeastern United States and was the first European to see the Mississippi River.

(Describer) The pointer on a timeline goes to 1496. A map zooms in on western Europe, then Spain.

Born around 1496 in Spain, Hernando de Soto knew at a young age that he wanted to explore the Americas. His keen horsemanship earned him a spot onboard a 1514 Spanish expedition to the New World. Once there, de Soto quickly earned a reputation for being clever, ruthless, and fierce. In Panama and Nicaragua, he captured chiefs of indigenous tribes and held them for ransom. He sold natives into slavery and became so rich, he formed his own cavalry and fleet of ships to explore for gold. In 1532, de Soto offered to assist another conquistador, Francisco Pizarro, on an expedition to explore Peru and conquer the Inca Empire, then the largest civilization in the New World. It spanned 2500 miles and included more than 10 million people. De Soto gave Pizarro ships and horsemen. In return, Pizarro made de Soto his chief lieutenant and promised him a large share of the spoils. Leading an advanced guard of cavalry in Peru, de Soto met with the powerful Inca emperor, Atahualpa. Failing to convince Atahualpa to surrender, the Spaniards attacked. Although outnumbered, they had horses and guns, giving them military superiority. They defeated the Incas, killing thousands, and took the emperor hostage. While Pizarro held Atahualpa for ransom, de Soto marched on Cuzco, the Inca capital. Having discovered the great national road leading to Cuzco, de Soto led his advanced guard there, captured the city, and plundered it for gold and silver.

He returned to Spain a wealthy man, but after two years, he yearned to explore more of the New World, particularly Florida and the Gulf Coast, in hopes of finding another wealthy empire to conquer.

(Describer) In a re-enactment, he walks on a beach and gathers with three men.

In 1538, he set sail with 10 ships, 350 horses, and 700 soldiers. For three years, de Soto explored Florida, the Southeastern Appalachian region, and present-day Alabama, futilely searching for gold. Indigenous warriors frequently battled de Soto and his soldiers, but the Spaniards used attack dogs and armored men on horseback to prevail. Those who weren't killed outright were enslaved. Most of the natives died from punishment or diseases transmitted from Europe, like smallpox and measles. Still searching for gold, de Soto marched farther west into present-day Mississippi. In 1541, he came upon the Mississippi River. De Soto was the first European to see the great river and crossed it into the states now known as Louisiana and Arkansas. He stayed to claim those areas west of the Mississippi for Spain, but then turned back. In May, 1542, de Soto died from a fever on the western banks of the Mississippi.

(Describer) In a painting, he wears silver armor.

Hernando de Soto conquered more civilizations throughout the Americas than any other single conquistador. The treasures he plundered made Spain the richest and most dominant European empire of the age. His exploration of the Southeastern United States laid the foundation for Spanish colonization of Florida, but many Southeast indigenous tribes went extinct after contact with the Europeans. A few members of de Soto's expedition kept journals, which became the first and only records of the Southeast's original inhabitants. Accessibility provided by the U.S. Department of Education.

As one of Spain's conquistadors, De Soto explored South and Central America in pursuit of treasure. Known for his ruthless tactics, De Soto enslaved indigenous tribes during his travels. Part of the "World Explorers" series.