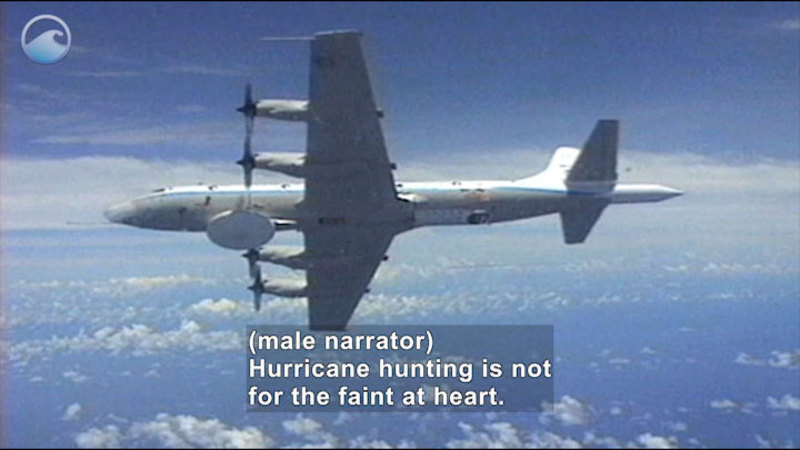 (Describer) Above an ocean horizon, a logo of a wave rises. Title: Ocean Today.

(Describer) A big swirling cloud is shown with a few small planes. Titles: Tracking Storms. The Hurricane Hunters. The picture swirls and fades.

(Describer) A plane takes off. With another one, subtitles: Pilot 1: “John, how far north are we going to be going on the northbound track?” Pilot 2: “108 miles north of the eye.” The planes each have a round disk under them.

(male narrator) Hurricane hunting is not for the faint at heart. These brave men and women must fly into one of the most destructive forces in nature.

(Describer) One flies into a cloud.

Hurricanes are born over the open ocean, and while satellites can track their movement, meteorologists and researchers need to sample the storms directly to get the most accurate information about them.

(Describer) It flies through space surrounded by clouds.

(Describer) ...which is smaller.

The P-3s fly through the storm, encountering devastating winds that can be over 150 miles per hour. The jet can fly higher than the turboprops, gathering data from the upper atmosphere. Both planes have high-tech equipment on board to get the job done, like radar and fixed probes that measure particles in the air.

(Describer) One probe sticks out the front. A cylinder is dropped.

Scientists also deploy dropwindsondes, which parachute down through the hurricane to the ocean surface, sending back data on...

(Describer) A 3D model of a storm is made.

These measurements can help us understand the structure of a storm and the winds steering it. The data is used in computer models that help forecasters predict how intense the hurricane will be and where and when it will strike land.

(Describer) The forecasted path for Hurricane Katrina is shown.

Hurricane hunters take a literal look into the eye of a monster formed by nature. Their courage helps further science, which saves lives.

(Describer) A plane with a probe flies out of a cloud. Accessibility provided by the U.S. Department of Education.

A hurricane hunter is a pilot that flies an airplane into the middle of a hurricane. They gather data on temperature, humidity, and air pressure. This data is critical for forecasting the intensity and path of hurricanes. Part of the "NOAA Ocean Today" series. 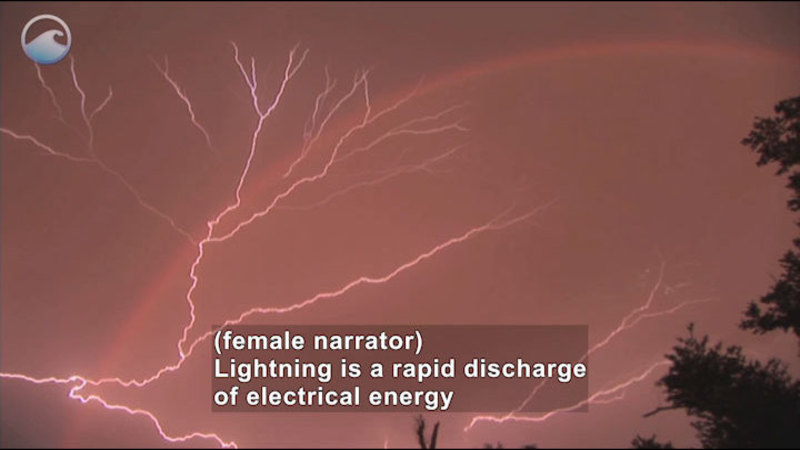