Science Nation: Investigating the Impact of Natural and Human-Made Nanomaterials on Living Things 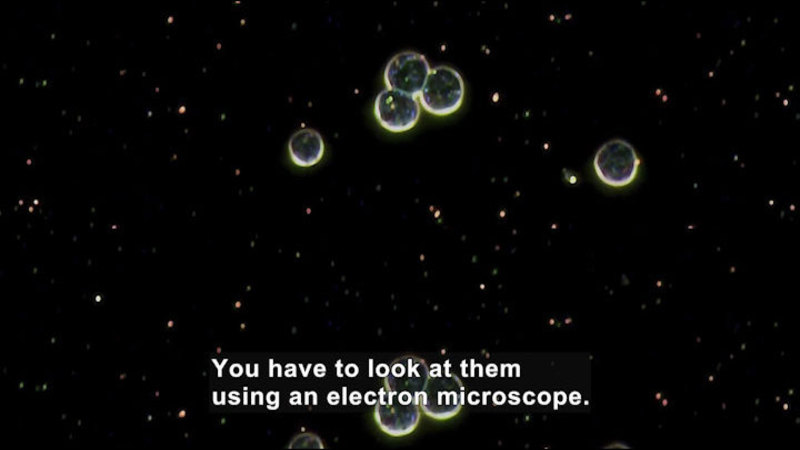 So let's see if there is some snails in there.

(narrator) Though we don't know it, we're exposed to them all the time-- even eating and drinking them. You can't see them with the eye or with an optical microscope either. You have to look at them using an electron microscope.

(Describer) Two other women work in a lab.

(narrator) With support from the National Science Foundation, researchers at the Center for the Environmental Implications of NanoTechnology are studying how these tiny particles move through the environment and impact living systems.

Welcome to what's called the mesocosms-- a large outpost in the middle of Duke Forest.

The mesocosms are really simulated wetlands that serve as controlled-release facilities, where we can release nanomaterials into a location without them being widely dispersed in nature, and then be able to very carefully track where they go-- how much ends up in plants, in the fish, in the sediment, in the water. These experiments take place over about a year.

(narrator) Today ecologist Steve Anderson is doing water testing. Months ago, they introduced gold nanoparticles into this container. We do this weekly to monitor the box, since we have fish and organisms in there, to see if that varies between different treatments that we're applying, compared to the controls.

(narrator) In the lab, environmental toxicologist Richard Di Giulio has tanks of zebrafish swimming in water spiked with different concentrations of plastic nanoparticles. They're finding some developmental defects. This is a healthy fish embryo. In a comparison, that's the embryo that was exposed to plastic nanoparticles. That's called a string heart deformity. Those nanoparticles are accumulated in the brain, the heart, the liver, the pancreas. We were very surprised at that. Are you running surface waters today or single-particle?

(narrator) In her lab, Helen Hsu-Kim is studying the effects of different nanometals on fish and wildlife. Results are very preliminary, but they're seeing silver and gold particles, widely used in industrial manufacturing, are more toxic than they thought. And selenium, used in the semiconductor industry, is a particular concern too, though a little is good for your diet. There's a small gap between this being a nutrient and a toxin. And too much selenium in aquatic systems can result in toxicity to fish.

(narrator) Wiesner's vision is to turn this facility into a resource for industry, where manufacturers could test the safety of nanomaterials before being mass produced for market.

(Wiesner) Understanding this largely neglected nanophase in the overall system is important. We hope to use it in the future.

(narrator) A tall order for such tiny particles. This work carries big returns-- protecting the environment and our health.

At the National Science Foundation-funded Center for Environmental Implications of Nanotechnology (CEINT), headquartered at Duke University, scientists and engineers are researching how nanoscale materials affect living things. One of CEINT's main goals is to develop tools that can help assess possible risks to human health and the environment. A key aspect of this research happens in mesocosms, which are outdoor experiments that simulate the natural environment. These simulated wetlands in Duke Forest serve as a test bed for exploring how nanomaterials move through an ecosystem and impact living things. Part of the “Science Nation” series.