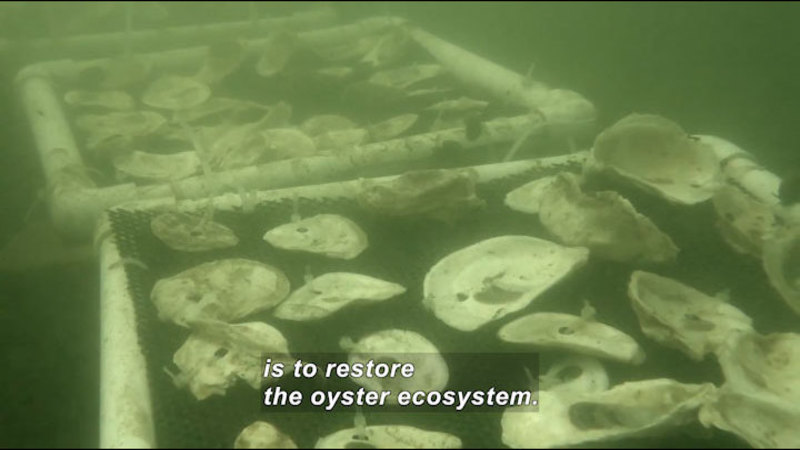 (Describer) Two girls pull a bucket up from a bay.

But this is New York too. These city kids from Brooklyn are getting their feet wet and not just because it's raining. Everybody say, "Meteorological!"

(narrator) They're on a field trip to New York Harbor,

(Describer) A shellfish trap is pulled up too.

getting down and dirty with oysters. We decided that we wanted to help students

get to the water's edge, conduct research, and ultimately become citizen scientists themselves. What is protocol four about?

(narrator) With support from the National Science Foundation, Pace University educator Lauren Birney and her team are getting middle school kids involved in an ambitious restoration program called the Billion Oyster Project. New York Harbor was one of the most productive estuaries.

More biomass produced in this estuary than anywhere in the North Atlantic. Now it's sitting at around one percent of its historic abundance.

(narrator) Murray Fisher cofounded the project. Now he's partnering with Birney to broaden its reach, getting more kids like these into the field, learning oyster-bed restoration and exploring science firsthand.

(woman) This is an oyster toadfish.

(Murray) We found that the way to restore New York Harbor is to restore the oyster ecosystem. Which is really important because they're filter feeders.

And they clean our water and the environment, basically.

(Describer) A man studies a sample.

We do physical measurements of the oysters.

(narrator) Middle school teacher Michael Seymour is all for it. This active education and active instruction-- this is the best you can get, where you're physically measuring things and actively contributing to a database that's for the greater popular good, really. That's math--that's math and science and technology and engineering, not just taught, but lived.

(narrator) Kids are catching on. I used to hate nature. I thought grass was disgusting.

All the mud gets on your pants. What changed in my heart was when I saw oysters helping us and learned about them. Millions of them die every day. We need them for clean water.

(girl) We learned how to do stuff, including water quality. Like, pH dissolves oxygen. Yeah, pH. Ammonia.

(man) Students should be assigned--

what the Billion Oyster Project is telling people. Why shouldn't we work together?

(narrator) Birney plans to expand the program beyond New York.

(Lauren) The idea is to allow kids to communicate in real time, then allow for others to say, "What about New York Harbor? What are kids doing in Australia?" We're creating this smart and connected community in New York City, then allowing that to grow into other communities.

(narrator) Using oysters to teach kids how to preserve the natural treasures in their own backyards-- there's a pearl of wisdom for you.

With support from the National Science Foundation (NSF), Pace University educator Lauren Birney and her team are getting middle school students involved in an ambitious restoration program. The students study New York Harbor and the extensive watershed that empties into it. They also conduct field research in support of restoring native oyster habitats. Part of the “Science Nation” series.