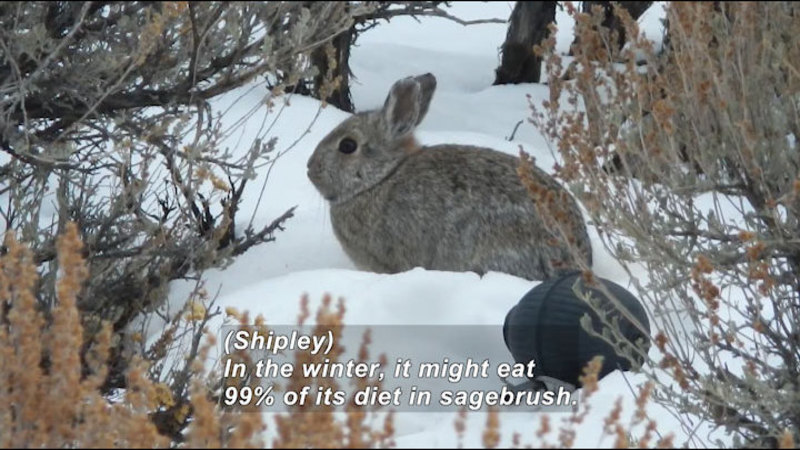 (Describer) Streams of light collide to create a globe filled with water. Title: Science Nation. As three people search through scrub, a woman says, “He’s running toward you!”

(narrator) When your task is trapping a rabbit, you gotta be on the hop.

(Describer) She says, “There he goes!”

(woman) We are in eastern Idaho, in the Lemhi Valley, a high-desert valley running along the Montana border. It's a sagebrush steppe environment, meaning it's a mix of shrub and grasslands. It is just a gorgeous, intact piece of sagebrush landscape. It's not usually this hard.

(narrator) Supported by the National Science Foundation, University of Idaho mammalian ecologist Janet Rachlow and a team want to understand this critical habitat from the perspective of a small, but important, long-term resident-- the pygmy rabbit. Today they're trapping and collaring.

[beeps] There we go.

(Describer) A device beeps beside one.

(Rachlow) We hope our research can contribute to not just an understanding of rabbits, but also of how this system functions, so that, long term, this system is on the landscape in a healthy condition.

(Describer) Among brush and twisted branches, a hole is found.

(Rachlow) They have a tough life, they really do, with lots of predators. Aerial predators--so birds-- there are mammals, the badgers, weasels, coyotes. Just about everything eats pygmy rabbits. So hiding, putting themselves in places close to burrows where they can escape from predators, that's really important.

(Describer) There are no trees – just bushes.

(narrator) Sheltering from the heat and cold is important too. But so is food. Sometimes they venture into the open to eat. Lisa Shipley is a foraging ecologist with Washington State University.

(Shipley) In the winter, it might eat 99% of its diet in sagebrush. It's very nutritious, with a lot of protein. But it also has lots of toxic chemicals. It's the only mammal that can eat sagebrush for virtually exclusively its diet.

(narrator) Using tracking data from the collars and imagery from unmanned aerial vehicles, the team generates maps showing where and when the rabbits spend their time-- in burrows, under the sagebrush, and in the open. Maps like these tell a lot about how the rabbits use and shape the landscape.

(Describer) They hold a rabbit in a mesh bag.

(narrator) Big picture-- they hope their work with rabbits will help preserve this rich sagebrush ecosystem, covering large swaths of the Western U.S.

(Rachlow) We know that certain species of sagebrush, certain ages of sagebrush, on certain landscapes, have higher nutrition. That could be targeted in restoration projects that might use seed sources from sagebrush from different areas. We would like to understand habitat quality, so that we can work with land managers to help with, say, restoration. Large fires have occurred in several of the Western states in sagebrush environments. A lot of energy and time goes into restoring the habitat so that it's suitable for wildlife and domestic livestock. We need to know--how should we restore this environment?

(narrator) That's nothing to quiver your nose over.

The Lemhi Valley is a sagebrush steppe in Eastern Idaho, along the border with Montana. It is a critical habitat for the pygmy rabbit, and University of Idaho mammalian ecologist Janet Rachlow is gathering data to create maps showing where and when the rabbits spend their time. What they learn about the links between habitat features and habitat use could help inform future decisions involving land management and restoration for these types of environments. Part of the “Science Nation” series.