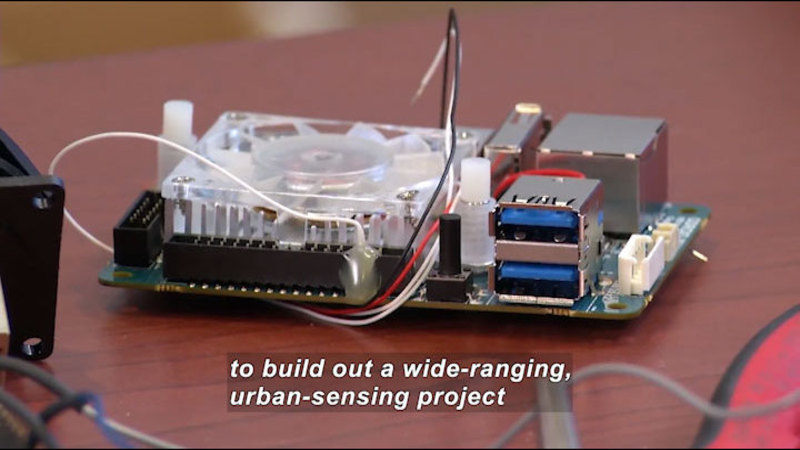 (Describer) Streams of light collide to create a globe filled with water. Title: Science Nation. A man carries a device up a ladder to a post with a traffic light.

(man) I got the bander and the hammer.

(narrator) Heads up, Chicago. You're not just the Windy City anymore, you're a smart and connected one. The pole base would be too tight.

(narrator) With support from the National Science Foundation, computer scientists at the University of Chicago work with colleagues at the Argonne National Laboratory to build out a wide-ranging, urban-sensing project known as "The Array of Things." Think of it as a fitness tracker for a city-- a network of 500 computer nodes designed to gather data on livability factors all over the city, from climate, weather, and air quality to noise and traffic.

(male #2) Inside this device is computing capability that allows us to put deep learning right down into the platform. By that I mean machine learning capabilities that will interpret the data right there, not send it to some cloud for analysis. You'll pull up a city map and see where the nodes are. Then you'd say, for this part of the city, I want all of carbon monoxide for this twelve-hour period, or for this six-month period.

(narrator) Charlie Catlett sees the Array of Things leading to some practical urban upgrades, like safer routes for pedestrians. And the real-time benefits could help the city save money.

(Catlett) If we know the temperature of the roadway in a much more precise way, we can look at treatment of roads in winter that might differ from the current policies that blanket the entire city.

(narrator) The devices themselves are designed to balance cost, size, and reliability and stand up to harsh Chicago winters. All the sensors are inside here, and there's a camera down there. And these are the individual sensors that measure carbon monoxide, nitrogen dioxide, hydrogen sulfide, ozone.

(narrator) Pete Beckman says privacy is paramount. Nodes temporarily record images, but once the data of interest is extracted, the image gets purged from the system. We worked very hard to see how can we manage and design something that can process data and then just send back the results of that?

(narrator) The data sets are open to all experts who want them, including urban planners, health workers, and sociologists. And the public will have access too. Imagine that you are a parent

and you have a child with asthma. You would know if your node shows high pollen rates today. And maybe you would decide to drive your kid to school rather than walk.

(narrator) Catlett says at least 60 cities have asked them about doing similar projects in their own communities. So keep an eye out. The Array of Things may come soon to a light pole near you. For Science Nation, I'm Miles O'Brien.

University of Chicago scientists are collaborating with researchers at the Argonne National Laboratory to build a wide-ranging urban sensing project in Chicago known as the Array of Things (AoT). A network of 500 computer nodes gather data on various livability factors from all over Chicago. These factors include climate, weather, air quality, noise levels, and traffic. The data is gathered in real time and helps individuals understand the complexities of city dynamics. Part of the “Science Nation” series.