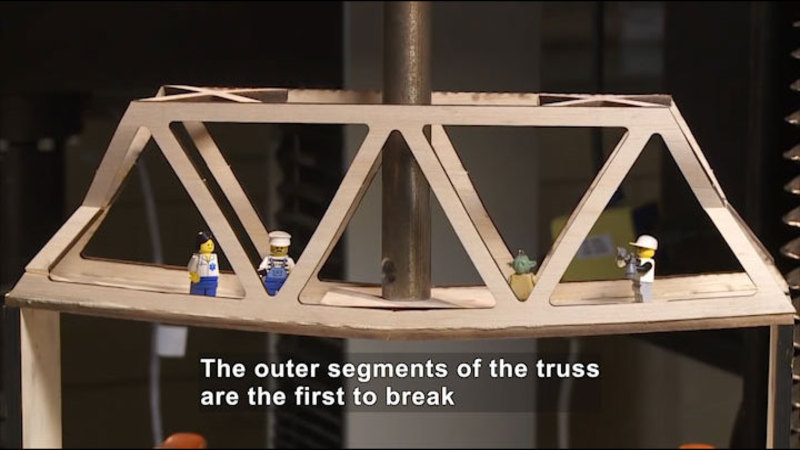 (male narrator) Last video, we looked at the designs of beam and arch bridges. Let's move into the modern age with the truss bridge.

(Describer) It has diagonal beams that form triangles.

Truss bridges use a large frame, called a truss, that sits on top or below the bridge deck. Here it is on top. While it seems like we're adding weight to the deck, the truss distributes the load through the frame so the deck does not experience as much of a load.

(Describer) A truss is shown in a diagram.

Each segment of the truss experiences different loads of either tension or compression. We apply two equal loads to the deck and calculate the loads in each segment, shown as percentages of the total load. The largest loads are on the end and top segments, while the middle segments have none.

Remember that when we do the compression test. Spoiler alert!

(Describer) A balsa wood truss bridge is placed under the one column of the compressor and clipped to the base. Lego figures are added.

Let's see if this convict gets shot out of his truss jail. So how do you think the truss will break? Discuss.

(Describer) Also added are a female doctor, man with tools and Yoda.

Thanks for coming, Yoda. I love your work.

(Describer) Controlled by computer commands, the column is lowered.

The outer segments of the truss are the first to break because they handle the largest part of the load. The diagram showed the outer and top segments had the same loads. Why didn't the top break? Because the top pieces aligned along the wood grain, and wood is stronger in that direction.

Adding the truss allowed the same deck length to hold 32 pounds, which is 25% stronger than the beam bridge of the same length. The final type of bridge we'll discuss is the iconic...

(Describer) Cables hang over the deck between towers.

Although, the only suspension bridge around us is less than iconic, but the same principles apply. Suspension bridges utilize thick steel cables that support the deck and transfer the load to the towers and anchors at the end of the bridge. Supporting cables suspend the bridge deck from the main cables.

(Describer) The structure is shown in a diagram, where a load points down from above.

The main cables and supporting cables of the bridge are always under tension. The cables transfer the load the towers, which experience compression, and also to the anchors at the end of the bridge.

In our model, we used wires for the main and supporting cables. Some construction is not ideal because it is difficult to simulate some of the joining points and anchors on a small scale.

(Describer) It’s set under the column and secured.

(Describer) More Lego figures are placed on the deck.

For this test, we need a full cast of characters. The Misfits versus... the Bike Gang. Oh, there's Crazy Guy again. Classic Crazy Guy.

(Describer) The pressure is applied.

As force is applied, the cables transfer the load to the towers and anchor points at the end. This force distribution maintains the deck's integrity, so that when it does break, it doesn't launch anyone...

unfortunately. I wanted to see Crazy Guy get launched. This bridge supported 32 pounds, which is the same as the truss bridge.

(Describer) A bar graph shows the breaking forces of all the bridges.

(Describer) The column is lowered onto the head of a sitting Lego man.

(Describer) The torso gets crushed, then the whole figure pops out from under the column.

This two-part video introduces the different types of bridges. In part two, truss and suspension bridges are introduced. The design of each bridge is shown schematically along with the load distribution. The advantages and limitations of each type of bridge is also discussed. Technical concepts covered include tension, compression, bending, span, force balances, material selection, and beam/cable design. Part of "Bridge Design (and Destruction)" series. 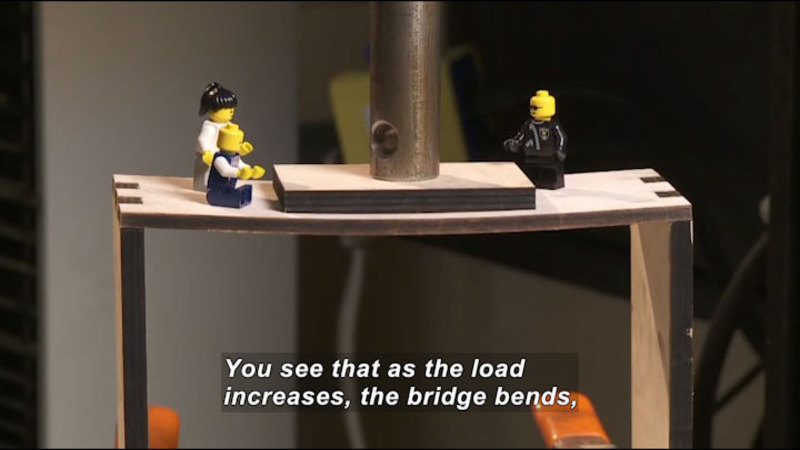