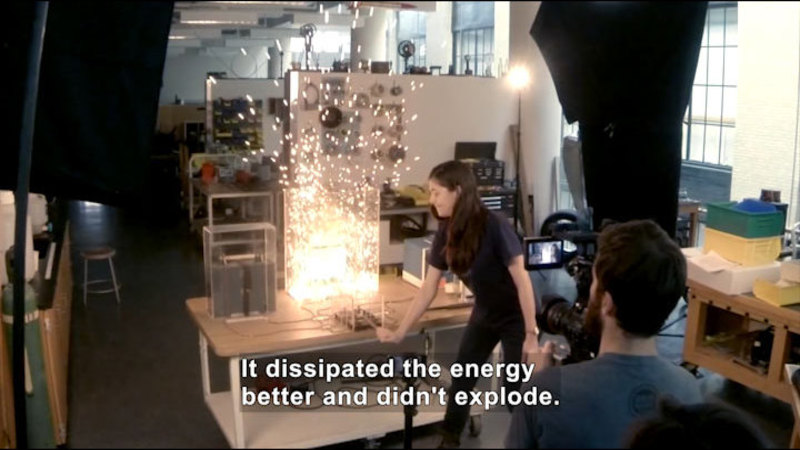 Let me show you something cool.

(Describer) A blue box with fuses sits on a table with red and black wires connected to a switch. When the woman pulls the switch, something explodes in a clear box, showering sparks that disappear.

So what just happened here?

(Describer) At the blue box...

This power supply created a current. A flow of electrons traveled over here to a capacitor.

Now, a capacitor is two metal plates in an insulating oil.

Charge can't flow through the oil from one plate to another, so it builds up on one plate, charging it negatively. The other plate is positive. This creates a potential difference, some voltage across the capacitor. Potential difference is like potential energy. The more charge between the plates, the more voltage and energy you have stored in the capacitor. I've been charging this capacitor for about 20 minutes. It's charged up now to about 3,000 volts. So that energy just sits there until I flip this switch. When I do that, I'm completing a circuit, where an iron wire connects two plates of the capacitor.

(Describer) ..in the clear box.

(Describer) Water gushes over a river.

Huge water flow. It's the same thing here. Electrons rush from the negative plate through the wire to the positive plate, and the wire can't handle that current. You might have heard about Ohm's Law in physics. The voltage in the capacitor, after it's charged up, is going to be really high. The resistance in this wire is small. The current going through it is going to be huge. When current flows through anything with resistance, even just a little resistance, energy is dissipated as heat. The huge amount of current produces so much heat that the wire can't dissipate, so it explodes instead. Now, the wire actually explodes before the charge can leave the capacitor. I'm going to touch this copper bar to the two capacitor plates so it can finish discharging.

(Describer) Holding the bar’s handle, she touches it to the plates.

The thick copper bar has a higher resistance than the thin iron wire. It dissipated the energy better and didn't explode.

(Describer) The explosion is shown in slow-motion. Title: Made with love at MIT. Accessibility provided by the U.S. Department of Education.

When Natalia flips a switch, a huge explosion happens. She explains the physics behind Ohm's Law. Part of the "MIT Physics Demos" series. 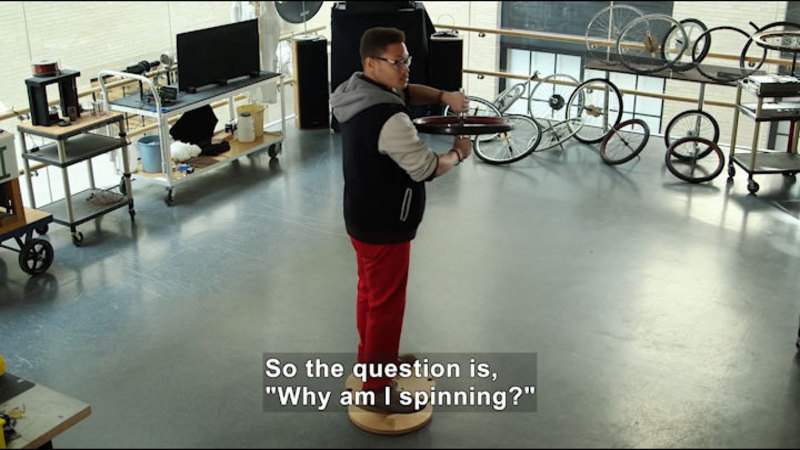