How Do Braces Work? 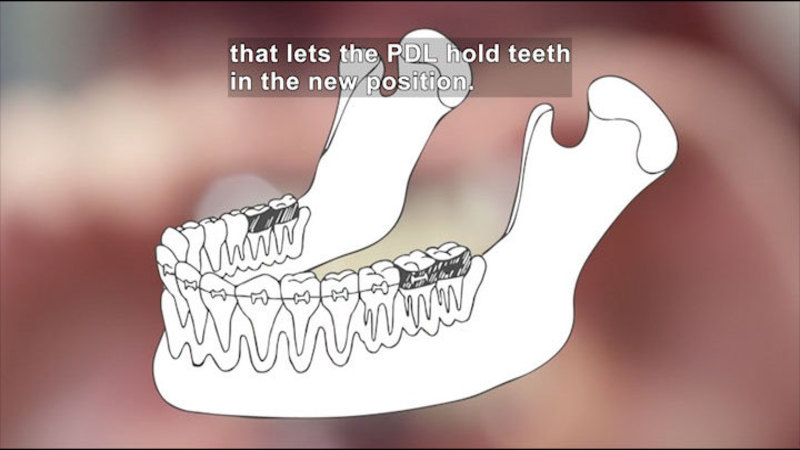 (Describer) An animated ball becomes an amoeba and a rocket. Title:

(Describer) A hammer lies on a table.

Every day, we rely on a substance that's harder than steel: our teeth.

(Describer) The woman smiles. She bites into an apple, a donut, and bread.

(Describer) She chews, then holds a gumball in her teeth.

There's tissue called the periodontal ligament, or PDL, around your teeth under your gums. The PDL is a shock absorber, cushioning your jawbone from the chewing forces. Okay, so far, so good. What if your teeth come in funky?

Sure, it looks goofy, but that's not the only reason that somebody might want to fix it. Funky teeth can interfere with the way you talk and eat. How do we fix this?

(Describer) She takes them out and gives them to someone wearing a glove.

Well, we basically break our mouths with braces, except it's actually our bodies that do the breaking. The PDL has these cells called mechanoreceptors. When they detect a force on your teeth that's too big, they signal the brain to stop biting down before you hurt yourself. Braces tether your teeth, pulling them together or pushing them apart. Either way, they're applying a steady force to your teeth. And when mechanoreceptors in the PDL sense this kind of smaller but sustained force, they signal cells called osteoclasts to the area, which spew out acid and proteins to dissolve parts of your jawbone. Then the mechanoreceptors signal osteoblasts to come, and those cells deposit minerals that make bone. Osteoblasts rebuild the jawbone in a new shape that lets the PDL hold teeth in the new position. So braces basically force your body to dissolve itself and then rebuild itself according to their evil whims. Sounds barbaric, right? But your body is breaking down and rebuilding bone using osteoclasts and osteoblasts all the time, not just if you have braces.

(Describer) A toddler pushes a baby in a cart.

Bone remodeling is the way our body grows. The infant body replaces almost all of its original skeleton by the time it's a year old. And it happens throughout our entire life. Ten percent of my bone material is technically new since last year. We can manipulate the bone remodeling process to get straighter teeth and treat diseases, like osteoporosis, which make your bones brittle. By keeping overactive osteoclasts from dissolving the bone so much, or by boosting osteoblasts to produce more bone, drugs can prevent bones in those patients from breaking easily. People with severe bone injury rely on bone transplants, where they take bone from other parts of their body and move it to the damaged area. Sometimes that's not possible, and it's always painful. Instead, Paula Hammond's group at M.I.T. has created material that very slowly releases proteins.

And these proteins cause osteoblasts to go right to the site where the injury happened and generate new bone. This was a big deal for us, because it's hard to generate something that very slowly releases the protein. Very often, the protein comes out rapidly, gets swept away in the body, and no longer has any effect. It's easy to dismiss braces as medieval torture. But it's amazing that this mouth torture works and the technology that makes it possible is not just in your braces, it's in your bones.

(Describer) Title: Made with love at MIT. Sitting in a dentist’s chair...

Accessibility provided by the U.S. Department of Education. Hi, I'm Andrea, and thank you for watching Science Out Loud. If you liked this episode, check out our other videos.

How do braces make teeth straight? They actually just copy the process that the rest of bones naturally undergo. Part of the "Science Out Loud" series.