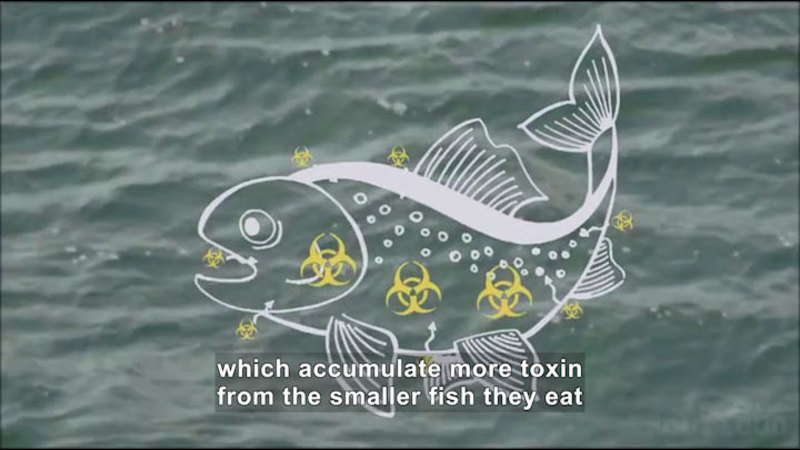 This rock can absorb the sun's heat and release it hours later, after the sun has set.

(Describer) Wading in a river...

This is fine with rocks in the sun. It also happens with bodies of water and toxins.

(Describer) An old culvert is nearby.

Rivers, lakes, and oceans still release contaminants dumped into them up to 100 years ago.

(Describer) A photo shows a jumble of barrels.

From 1947 to 1977, humans dumped hundreds of thousands of pounds of polychlorinated biphenyls into the Hudson River.

(Describer) The molecular model is shown.

Those PCBs attached themselves to sediment particles and settled to the bottom. Like that rock releasing heat, the sediment has slowly released the PCBs into the river, where they're absorbed by tiny plants and animals, like daphnia and worms. Those animals get eaten by slightly bigger animals and eventually get eaten by animals like us. But not only did the PCBs poison the Hudson at the dump site, the river's flow spread toxic sediments up to 40 miles away. So how do we decide where to clean up? We could take sediment from random places and measure the toxins, like we do now. But that's expensive and takes forever. Plus, it doesn't reveal toxin levels in bigger fish, which accumulate more toxin from the smaller fish they eat than from swimming in contaminated water. How do we determine if fish are safe to eat, and if not, where do we clean up? We're at the top of the food chain, but our answer is at the bottom.

(Describer) In a lab, she sits with two small water samples.

Tiny plants and animals living near the bottom of a river get exposed to more contamination and absorb it more quickly than the bigger fish. They're a great indicator of where there's toxins and whether big fish around them might also be contaminated. But because they're tiny, they're hard to catch and analyze.

(Describer) In the river...

By engineering something that mimics them and measuring that, we could learn how contaminated the bigger fish are and determine where the sediment is contaminated. This piece of plastic can do that. It's made from polyethylene, a molecule that looks similar to fat. Toxins absorbed by an organism go straight into that organism's fat. If we put this plastic sampler into the bottom of the river, it will accumulate toxins just like our organisms.

(Describer) In the lab, she cuts out a piece of the plastic and puts it in a vial.

(Describer) Adding a liquid, she sets it down and it shrinks when she snaps her fingers. Then she puts it in a machine.

We'll measure how much contaminant is in the sampler and use a computer simulation to determine contamination levels throughout the food chain. This tells us if the fish are safe to eat. We can put many of the cheap samplers in the river to determine where the sediment requires the most cleaning.

(Describer) By the rocks...

Chemicals released decades ago are still affecting our environment. But engineering solutions inspired by the simplest creatures might help answer a complicated problem.

(Describer) Titles: Made with love at MIT. Accessibility provided by the U.S. Department of Education.

Figuring ways to clean up contaminated waters is a huge challenge. But luckily, a simple piece of plastic that mimics fish fat can help. Part of the "Science Out Loud" series.