Thanks to Gary Robson: http://garydrobson.com/

What are Real-Time Captions?

Real-time captions are created and displayed at the time of program origination. They are encased in white letters with a black background. They typically scroll up to three lines and the captions come after double chevrons ("greater than" symbols). The top line of the three lines disappears as a new bottom line is added, allowing the continuous rolling up of new lines of captions.

See the attached graphic, courtesy of the National Captioning Institute, for the complete real-time captioning process.

Why is Real-Time Captioning Used?

Real-time captioning is used for lectures/presentations, such as a training seminar, a corporate meeting, sporting events, or "live" events that do not allow time to prepare off-line captions. Real-time captioning simultaneously converts the spoken word into printed format using computer-aided translation, which appears on a large screen for anyone to view. The letters are similar to what one types on a computer screen.

What is the Accuracy Rate?

Since all kinds of real-time captioning use verbatim (unlike off-line--or prerecorded--closed-captioning and open-captioning), high presentation rate—or words per minute—are the norm because people speak faster than they read.

Good captioners are capable of typing at speeds of up to 225 words per minute, or even faster in short bursts. Typing at such high speeds, mistakes are inevitable even with the required accuracy rate as set by the captioning company, which is typically 98% or better. Many words are homophones (words that either sound like or are pronounced the same in the English language but are spelled differently), which result in distorted meanings. Examples include words such as there/their/they're or two/to/too. More complex examples include words such as bull we will for boll weevil, thigh breaker for tiebreaker, and two networks for terrorist networks.

There is no governing body for captioners, but credentials are assigned either by the state board overseeing court reporters, or by the National Court Reporters Association (NCRA) at http://www.ncraonline.org.

Prelingually deaf (or culturally Deaf) people usually have sign language—ASL—as their first language, and English came later. Some might be more comfortable and comprehension level might be higher with an interpreter.

Postlingually deaf people (or late-deafened adults) learned English before they learned to sign, if they learned to sign at all. For these people, captions might provide a better comprehension level. For example, in a speech with heavy use of proper names and specialized terminology, it might be easier to follow captions than a sign language interpreter frantically fingerspelling.

How Much Does Real-Time Captioning Cost?

The range is from tens to hundreds of dollars per hour. It also depends on several factors, which include the:

Where Can I Locate a Real-Time Captioning Company?

Also, check into the Described and Captioned Media Program's site at http://www.dcmp.org and check out their Captioning Service Vendors listing.

If I Want to Do Real-Time Captioning, What Equipment Do I Need?

You need a stenographic keyboard, computer, modem, captioning software, two televisions, headphones, encoder, and the video source. Your captions will then go to a videotape recorder to be recorded, or out to a broadcaster.

As a governmental experiment in the early 1950s, computer-aided translation was embarked on by the United States Air Force and IBM. Translating foreign languages into English into the computer using a stenographic machine rather than a standard keyboard was considered as the fastest method to accomplish this task.

The computer translation of Russian was successfully implemented by the United States government during the mid-1960s. Later in that decade, stenographic shorthand outlines were translated into English words.

In 1981, the computer and software were sophisticated enough so that with the addition of a highly skilled court reporter, broadcast closed-captioning was begun. This spread to the court systems nationwide, not only for speeding up recordmaking, but full participation in trials for deaf and hard of hearing jurors and litigants. 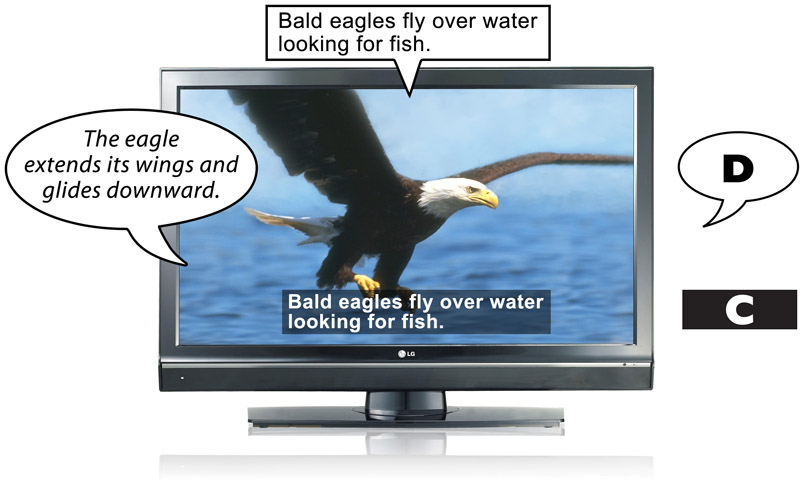