About Read Captions Across America

The National Association of the Deaf (NAD) launched the first “Read Captions Across America” campaign in 2006 as a part of the National Education Association’s (NEA) annual “Read Across America” initiative. This event is the nation’s largest reading celebration, focusing our attention on motivating children to read in addition to their mastering basic skills. Bill Stark explains what captions are, how they act as an instant reading incentive, and what reading benefits can occur from the use of captioning. The DCMP’s support to teachers, librarians, and others in making the activity a success is also overviewed.

The National Education Association (NEA) annually sponsors an event called Read Across America. Originally created as a one-day celebration of reading on March 2, Dr. Seuss’s birthday, the activity has grown into a nationwide initiative that promotes reading every day of the year. The result has been a focus of the country’s attention on how important it is to motivate children to read, in addition to helping them master basic skills.

The Described and Captioned Media Program (DCMP) is a partner of the NEA for this activity, with the DCMP placing emphasis on the benefits of reading captions. “A picture is worth a thousand words, but add print to the sound and TV becomes a reading tutor”. (Captions For Literacy, 2008).

The DCMP provides free-loan educational captioned media (DVD, CD-ROM, and Internet streaming) for teachers and families who have students with a hearing loss. It is supported through funding by the U.S. Department of Education and administered by the National Association of the Deaf.

Figure 1. Most people are familiar with television’s closed captioning, a technique of displaying the captioned text only when it is desired. It may appear in all capital letters (as shown here) or in mixed-case. Closed captioning of television programs is a legal requirement in the United States.

Figure 2. SDH are accessed through the onscreen menu of a DVD, but automatically appear on the DCMP media as they are a part of the picture. Keep in mind that not all DVDs have closed captions or subtitles; on the other hand, some have both.

Captioning is the process of converting the audio content of a television broadcast, webcast, film, video, CD-ROM, DVD, live event, or other productions into text and displaying the text on a screen or monitor. Captions not only display words as the textual equivalent of spoken dialogue or narration, but they also include speaker identification, sound effects, and music description.

Terminology to describe captioning varies widely and is often confusing to consumers. Most TV captions are referred to as “closed captions” because a built-in decoder chip must be used to open (make visible) the captions. See figure 1. Subtitles for the deaf and hard of hearing (SDH) are often a menu option on DVD, and they also appear on DCMP DVDs and streamed media. SDH looks a lot like captions, and conveys the same information. See figure 2.

Also, an increasing amount of content on the internet has sound. Some of it is captioned. Captions are critical reading aids for audio and video played through multimedia players such as Quicktime, RealPlayer, or Windows Media Player, but can also pertain to such technologies as Flash, Shockwave, or Java when audio content is a part of the multimedia presentation.

Captions: A Literacy Tool for Almost Everyone

While captions were originally developed for individuals who are deaf or hard of hearing, they are an aid to the reading and literacy skills development of many others. In the mid-1980s researchers determined that captions “… can turn television into a moving story book, a steady stream of written language presented with both video and audio reinforcement.” (Koskinen, Wilson, and Jensema, 1986). A little more than a decade later, research continued to demonstrate that “…captioned television can be used as a vehicle to literacy”. (Lewis, 1999). Again recently educators were asking “…why not turn on the captioning and let them ‘see’ the words as they hear them? And for older children who can read, how about also turning off the sound so that they can follow along by reading the dialogue?” (Sundius, 2008).

With documentation of its benefits and research support, why is captioning not more widely used? One answer as to why more home television viewers do not watch captioning was recently revealed in survey results: “70% of those who never use captions said they would turn on captions if they knew about all the benefits of captions.” (CaptionsON, 2008). DCMP experience confirms that educators are often unaware of the benefits to their students (see below). For these reasons, the DCMP “Read Captions Across America” campaign was born.

Our government has recognized the need for captioning, and important laws have been passed which mandate its availability. These include:

What is the DCMP’s Read Captions Across America?

The NEA’s Read Across America “…provides the NEA members, parents, caregivers, and children the resources and activities they need to keep reading on the calendar 365 days a year.” The DCMP supports that activity by:

As the NEA has said, “…teachers and principals seem to be more than happy to dye their hair green or be duct-taped to a wall if it boosts their students’ reading.” (National Education Association, 2009). But it is easier than that to take advantage of the TV captioning that is mandated by law—just turn on the captions! And it is painless (free-loan or delivered through Internet streaming) for parents and teachers who have children with a hearing loss to utilize the DCMP’s collection of educational captioned media!

Over 32,000,000 Americans are deaf or hard of hearing. There are additional millions who are just learning to read, have difficulty reading, or are learning English as a second language. America needs captions!

Join librarians, teachers, and parents across America who are encouraging reading and introducing wonderful books through captioned media! See figure 3. 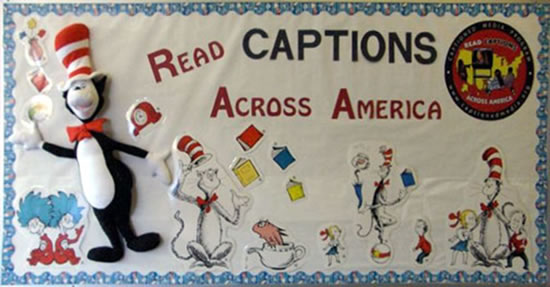 Figure 3. This Read Captions Across America bulletin board was created at the Idaho School for the Deaf.

Bill Stark is the former project director for the DCMP. On advocating for more (and better) captioning, he very much agrees with the sentiment expressed by Dr. Seuss in The Lorax: “Unless someone like you cares an awful lot, nothing is going to get better. It’s not.”

Cable In the Classroom (CIC)
Turning on television captions, so that words appear as they are spoken, is the next best thing to having someone reading a story aloud. Federal law mandates that all television programming must be captioned. CIC has the goal “…to foster the use of cable content and technology to expand and enhance learning for children and youth nationwide.” Browse the cable programs and web resources available for classroom use and use the creative, practical ideas for teaching with multimedia.
Described and Captioned Media Program (DCMP)
The DCMP provides a free-loan library of captioned media to its registered members. To qualify, you must be a teacher, parent, family member, or other person involved with educating K–12 students who are blind, visually impaired, deaf, hard of hearing, or deaf-blind. However, the DCMP also provides to everyone a database of captioned educational media available for purchase and other information about captioned media.

Join the RCAA Flickr group to see more photos, and to share your photos with other RCAA fans!

rcaa
Apply for a Free Membership