Barack Obama: The Power of Change

Presented by the Described and Captioned Media Program

Archival footage from campaign speeches by Barack Obama is interspersed with interviews and reflections from famous cultural figures in this chronicle of the 2008 Presidental campaign. Examines the cultural significance of Obama’s rise to prominence set against a backdrop of “hope, change, inspiration, and equality—for all Americans.” Among those interviewed or featured in this production are Oprah Winfrey, Michelle Obama, Caroline Kennedy, Mitchell Schwartz, Stevie Wonder, Dr. Cornell West, Tavis Smiley, Hill Harper, and Tyson Beckford.

The DCMP thanks Elbow Grease Productions for the opportunity to make this program accessible. Captioning for the program was provided by Caption Perfect, Inc., and description was provided by Bridge Multimedia. Captions and description are vital tools for providing equal access to students and the millions of other Americans who are blind, visually impaired, deaf, hard of hearing, or deaf-blind.

Pearl Jr. (born May 6, 1963 in Los Angeles, California) is an American writer, activist, journalist, and producer. She has authored three books, produced one documentary and administered four award-winning Web sites. Also the founder and owner of Elbow Grease Productions and Pearl Jr. Publications, she is best known for her work in the African-American community. Pearl Jr. graduated from Cal State Northridge and majored in Radio, TV, and Film with a minor in African-American Studies, finishing her degree in just 3 years.

Sign up for DCMP membership to view this video with description and captions.

Barack Obama: The Power of Change 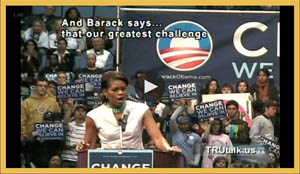 Additional Quotes from People Appearing in Barack Obama: The Power of Change

“I wouldn’t be here if it weren’t for the public schools that nurtured me and helped me along. And I am committed, as well as my husband, to ensuring that more kids like us and kids around this country, regardless of their race, their income, their status, or the property values in their neighborhood, get access to an outstanding education.”

Michell Obama
Speech at the U. S. Department of Education, February 2, 2009

“I have never had a president who inspired me the way people tell me that my father inspired them. But for the first time, I believe I have found the man who could be that president—not just for me, but for a new generation of Americans.”

“For the very first time in my life, I feel compelled to stand up and speak out for the man who I believe has a new vision for America.”

educators
Apply for a Free Membership