Captioning Key - About the Key

About the Captioning Key

The first captioning of films in America occurred in 1951, three decades before the advent of closed captioning on broadcast television. It was performed by Captioned Films for the Deaf (CFD), the ancestor of DCMP, which became federally funded in 1958. Guidelines were developed at CFD to assist teams of teachers and deaf persons who wrote captions for many years, first for films and then later for videos.

The CFD guidelines were the cornerstone reference for the first edition of the Captioning Key published by the DCMP in 1994. This new manual of captioning guidelines incorporated results of published captioning research and examination of procedures utilized by various captioning vendors in the U.S.

The Captioning Key guidelines have been a reference for captioning of both entertainment and educational media targeted to consumers at all levels (children through adults). The manual has received international distribution and has been translated into other languages.

In the 20 years since the initial publication of the Captioning Key, worldwide use of captioning has expanded, with many different types of media being captioned at the time they are produced and distributed. DCMP has continually monitored consumer feedback, captioning research, studies, and reports such as the February 2014 Federal Communications Commission's "Closed Captioning Quality Report and Order, Declaratory Ruling, FNPRM." Results have been incorporated into revisions to the Captioning Key. DCMP staff, along with numerous advisors, board members, teachers, parents, and vendors have all contributed to subsequent revisions.

These guidelines are a key for vendors performing captioning for the DCMP. But the information is applicable to all others that provide captioning of all types of media at various levels. Thus, these guidelines will also be useful to media producers/distributors and others who are considering captioning their products or learning about captioning.

It should be noted that the best practices detailed in this guide are not always possible to follow due to technical limitations. Depending on the software utilized and the distribution medium, features such as positioning, italics, and font choice may not be available.

About the Described and Captioned Media Program

The Described and Captioned Media Program (DCMP) provides services designed to support and improve the academic achievement of students who are blind, visually impaired, deaf, hard of hearing, or deaf-blind. These services include (1) a library of free-loan described and captioned educational media (available to teachers, family members, and others involved with educating qualifying K-12 students), (2) a learning center with information related to educational media access, (3) a gateway to Internet resources related to accessibility, and (4) training and guidelines for service providers and others performing captioning and description.

About the National Association of the Deaf

The NAD is the nation's premiere civil rights organization of, by, and for deaf and hard of hearing individuals in the United States of America. Established in 1880, the NAD was shaped by deaf leaders who believed in the right of the American deaf community to use sign language, to congregate on issues important to them, and to have its interests represented at the national level. These beliefs remain true to this day, with American Sign Language as a core value.

A Definition of Captioning

Captioning is the key to opening up a world of information for persons with hearing loss or literacy needs. There are more than 30 million Americans with some type of hearing loss. Millions of others are illiterate, learning to read, or use English as a second language.

Captioning is the process of converting the audio content of a television broadcast, webcast, film, video, CD-ROM, DVD, live event, or other production into text and displaying the text on a screen or monitor. Captions not only display words as the textual equivalent of spoken dialogue or narration, but they also include speaker identification, sound effects, and music description. Captioning is critical for students who are deaf or hard of hearing, but it also aids the reading and literacy skills development of many others.

It is important that the captions are (1) synchronized and appear at approximately the same time as the audio is delivered, (2) equivalent and equal in content to that of the audio, including speaker identification and sound effects; and (3) accessible and readily available to those who need or want them.

The DCMP believes that all captioning should include as much of the original language as possible; words or phrases which may be unfamiliar to the audience should not be replaced with simple synonyms. However, editing the original transcription may be necessary to provide time for the caption to be completely read and for it to be in synchronization with the audio.

Errorless captions are the goal for each production.

Uniformity in style and presentation of all captioning features is crucial for viewer understanding.

A complete textual representation of the audio, including speaker identification and non-speech information, provides clarity.

Captions are displayed with enough time to be read completely, are in synchronization with the audio, and are not obscured by (nor do they obscure) the visual content.

Equal access requires that the meaning and intention of the material is completely preserved.

The above guidelines are consistent with the 2014 mandates by the Federal Communications Commission (FCC).

Text refers to the appearance and presentation of the letters and words. Text considerations include case, font, line division, and caption placement.

Mixed case characters are preferred for readability. However, capital letters are used for screaming or shouting.

A font, or typeface, is a set of characters of a certain size, weight, and style. Font characteristics must be consistent throughout the media.

When a sentence is broken into two or more lines of captions, it should be broken at a logical point where speech normally pauses.

Captions for broadcast require a build-up time, also known as load time, in order for the captions to display properly. The build-up time is primarily dependent on the amount of text in the caption as calculated from the in-point of the current caption to the in-point of the subsequent caption. Captions prepared for broadcast or the DCMP must not include build-time errors.

Caption placement (vertical and horizontal) refers to the location of captions on the screen. Placement is not possible on all players, but when it is, the following guidelines are important for clarity. 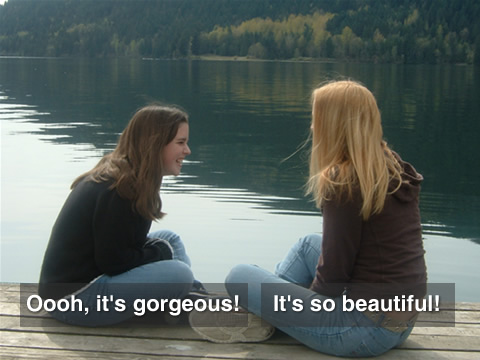 Language mechanics incorporate the proper use of spelling, capitalization, punctuation, grammar, and other factors deemed necessary for high-quality captioned media. Rules included in these guidelines are primarily those which are unique to captioning and speech-to-text. For conventional words, dictionaries and style guides must be followed. Proper names, technical terms, and specialized language must be verified though specialty references or directly from an authoritative source.

Use italics as follows:

Exceptions to the use of italics include:

A Definition of Presentation Rate

The presentation rate is the number of captioned words per minute (wpm) that are displayed onscreen.

A reoccurring question about captioning is whether captions should be verbatim or edited. Among the advocates for verbatim are organizations of deaf and hard of hearing persons who do not believe that their right for equal access to information and dialogue is served by any deletion or change of words. Supporters of edited captions include parents and teachers who call for the editing of captions on the grounds that the reading rates necessitated by verbatim captions can be so high that captions are almost impossible to follow.

As the debate has continued, researchers have tackled the question. A bibliography of research on reading rates is provided in the Captioning Presentation Rate Research document on the Captioning Key Appendices page. DCMP supports editing based on research results and the DCMP's half-century of captioning experience. Editing is often essential to ensure that students have time to read the captions, integrate the captions and picture, and internalize and comprehend the message.

When editing occurs, each caption should maintain the meaning, content, and essential vocabulary of the original narration. DCMP media users, who are the families and teachers of students who are deaf and hard of hearing, have enthusiastically praised the quality of the DCMP educational media and the captioning that provides equal access.

Each word is counted when calculating the presentation rate, as opposed to basing the calculation on the number of characters. In addition, speaker identification, sound effects, and other similar elements must be included in the calculations.

All lower-level educational media should optimally be captioned at a presentation rate not to exceed 130 words per minute (wpm), middle-level not to exceed 140 wpm, and upper-level not to exceed 160 wpm. However, as stated above, the original meaning, content, and essential vocabulary must be maintained. Achieving optimum rates is more difficult when complex new concepts and vocabulary are introduced in a media production.

The only times when presentation rate is ignored are when any person is quoted, a well-known or famous person is speaking on-screen or off-screen, poems and other published works are quoted, and/or song lyrics are sung. These must be captioned verbatim.

One way of achieving the desired presentation rate is by borrowing 15 frames before or after the audio occurs. This "borrowing" technique is hardly noticeable to the viewer.

An alternative way to achieve the rate is by editing. Following are two techniques for editing and examples:

Sound effects are sounds other than music, narration, or dialogue. They are captioned if it is necessary for the understanding and/or enjoyment of the media.

Establishing the identity of both onscreen and offscreen speakers is vital for clarity.

Spoken language is rich and full of meaning. However, it also consists of oddly formed sentences and even word play. Accuracy, clarity, and readability are challenges.

Intonation, Play on Words, and No Audio

This appendix is a research document which contains a conglomerate of studies related to both children and adults and how they view, read, and prefer captions. Initially, it seems to be common sense that verbatim captioning is the ideal, the mark of true equal access. However, it may be possible for spoken audio to be delivered so quickly that most people cannot read its verbatim captioning, which seems counter-productive to the goal of equal access.

Additional research is needed to determine how fast captions should appear on the screen and what presentation rates people prefer. These critically important issues have only partially been addressed. But there is an existing body of research and study that supports the DCMP policy and philosophy. Much of this documentation can be reviewed in its entirety from the Learning Center. Notes on these studies follow. 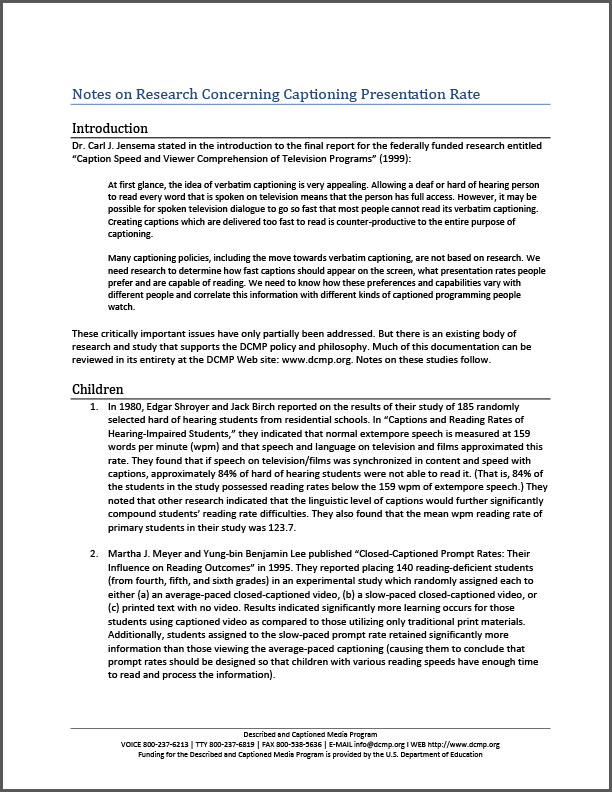 Experts don't always agree on rules for writing numbers or numerals. Captionists should follow a standard style manual, remembering to be consistent, or use this relatively detailed overview. 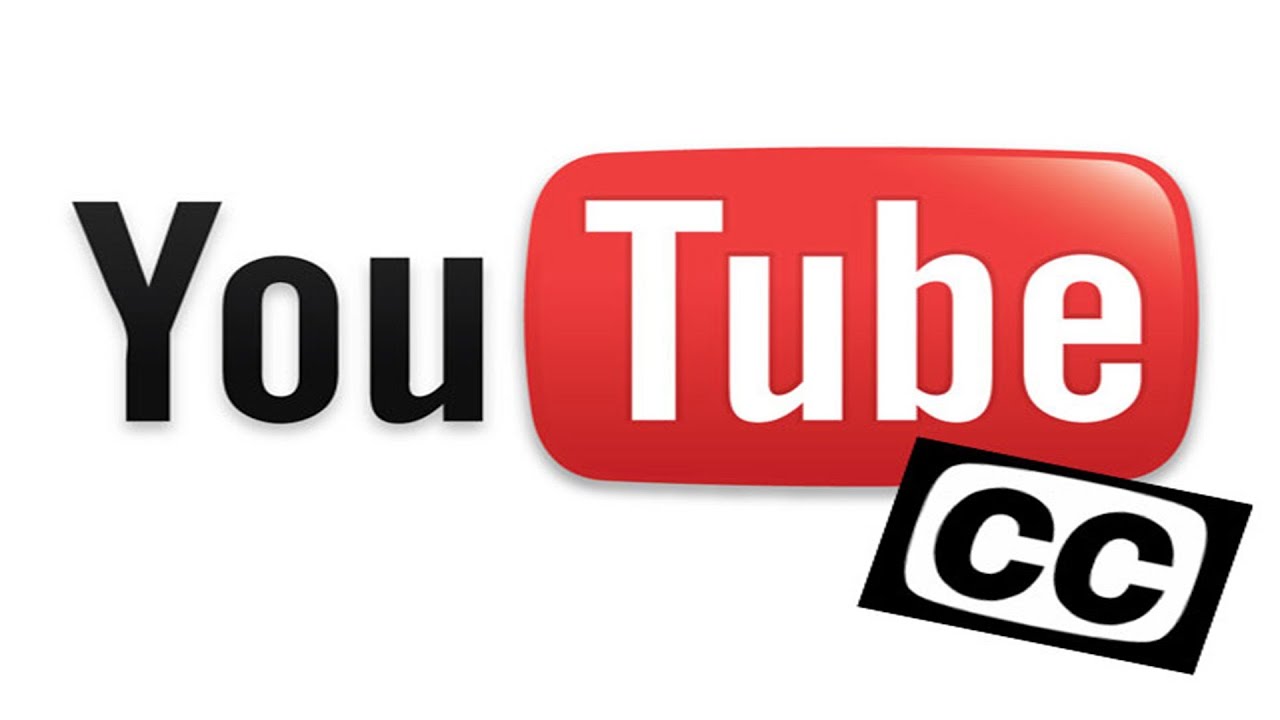 Google offers an “auto caption” feature for YouTube uploads by which text-to-speech software attempts to automatically generate captions from a video’s soundtrack. If you’d like slightly more control over the content of your captions, Google has also implemented “automatic caption timing.” To use this feature, simply transcribe all of the words found in your video, and upload it as you would your SRT (timed) caption file (see below). The same text-to-speech algorithms used for “auto caption” will synchronize your transcribed text for you, eliminating the need to worry about timecodes. (Check YouTube help for more about these automatic features.)

However, the safest (and most accurate) bet would be to upload an SRT file with your video; once completed, this will enable a “CC” button on the video player interface and captioning will be turned on by default. YouTube has provided instructions for users interested in adding captions to their YouTube videos.

The National Center on Disability and Access to Education (NCDAE) created cheat sheet to show the different ways of creating captions for YouTube videos:

If you create your captions with YouTube, you can download a SRT file for use in other applications:

Users can use dotSUB to create, import, and export a SRT file with their video. Captions are displayed on the video during playback. Captions can be turned on or off using up and down arrow buttons.